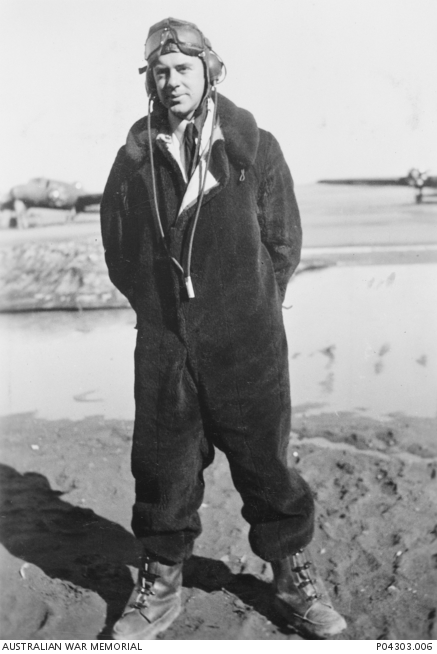 Informal portrait of 404360 Flight Lieutenant (Flt Lt) (later Wing Commander) Billy McFadden RAAF, wearing a full flying suit, including goggles and overboots, which were supplied by the Royal Canadian Air Force (RCAF). As a RAAF student pilot, McFadden was awarded his wings in May 1941 at No. 4 Service Flying Training School, Saskatoon, Canada, under the Empire Training Scheme (EATS). Whilst serving with No. 69 Squadron RAF, he was awarded the Distinguished Flying Medal (DFM) on 25 February 1943 for flying 14 operational sorties over the Mediterranean sea, including a successful torpedo attack on an enemy merchant ship in the face of heavy opposing fire from its escorting destroyer. Appointed to the rank of Wing Commander in July 1945, McFadden served at the RAAF Overseas Headquarters, London, before returning to Australia in September 1946.