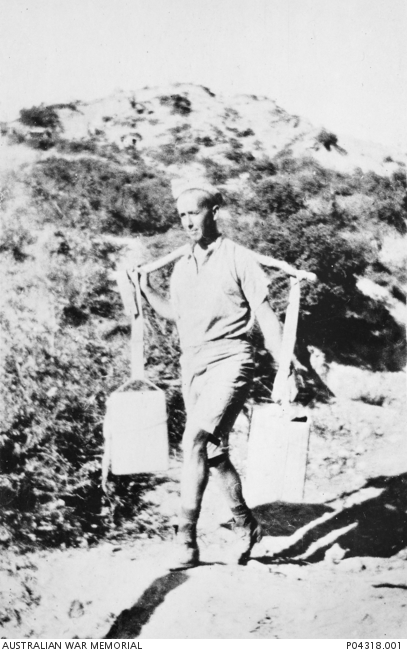 Portrait of 234 2nd Corporal (2 Cpl) Archibald Evatt (Arch) Bland, 1st Field Company, Australian Engineers, carrying water along Bridges Road on the Gallipoli Peninsula. Most of the water for the Company was obtained from wells sunk by the 2nd Field Company in the valleys. 2 Cpl Bland, originally of Gloucester, England, worked as an engineer prior to enlisting on 16 September 1914. He embarked from Melbourne, Vic, aboard HMAT Berrima (A32) on 22 December 1914. 2 Cpl Bland died of wounds received in the Chalk Pit at the beginning of the Battle of Pozieres on 23 July 1916, aged 30 years. Primarily used by the Australian Engineers during the First World War, Second Corporal was a former British Army rank in the Royal Engineers and Army Ordnance Corps. Second Corporals wore one rank chevron, but unlike Lance Corporals they held full NCO rank. The rank was abolished in 1920.