An AIF recruiting lantern slide for the Sportsmen's Unit, AIF. "Some sports now fighting. What ... 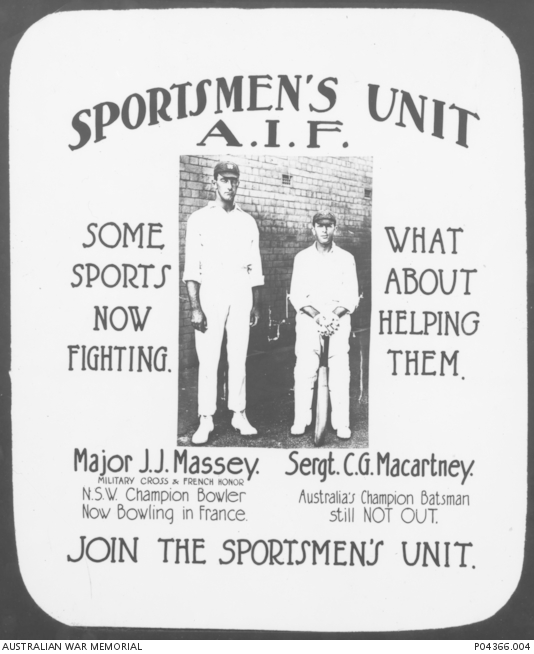 An AIF recruiting lantern slide for the Sportsmen's Unit, AIF. "Some sports now fighting. What about helping them. Major J J Massey and Sergt C G Macartney. Join the Sportsmen's Unit". Massey is actually Lieutenant Colonel Robert John Allwright (Jack) Massie , 33rd Battalion who had played cricket for New South Wales. 18380 Lance Sergeant Charles George Macartney embarked on 11 May 1916 with Headquarters of the 7th Field Artillery Brigade and later served with the 3rd Division Artillery and achieved the rank of Warrant Officer Class 1. In June 1918 he was awarded a Meritorious Service Medal. Macartney played cricket for Australia, New South Wales and Otago. His nickname was the "Governor General" and he was widely regarded as one of the world's best batsmen in the early 1920s. This slide is one of a series used in a 1917 recruiting campaign to encourage sportsmen to enlist in a sportsmen's unit, such as had been successfully raised in England. The concept was not as popular in Australia.