Group portrait of members of the Australian 1937 Coronation Contingent pose in front of the Great ... 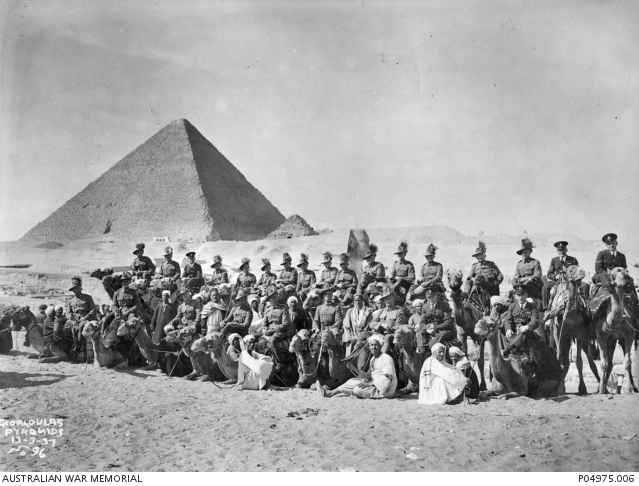 Group portrait of members of the Australian 1937 Coronation Contingent pose in front of the Great Pyramid of Giza (Gizeh). Identified are Lewis David Price (back row, fourth from right on a camel) and Arthur Sullivan VC (back row, third from right). 56133 Private Sullivan won the Victoria Cross medal whilst a member of the North Russia Relief Force when he single handedly rescued four men from a river whilst under fire. After the war Sullivan rejoined the National Bank and in 1929 moved to its Sydney office; in July 1934 he was appointed manager of the branch at Casino, NSW. He joined the Australian contingent to the coronation of King George VI and took with him the ashes of British VC winner Sergeant Arthur Evans who had died in Australia. On 9 April 1937, eleven days after handing over these remains, Sullivan died when he accidentally slipped and struck his head against a kerb in Birdcage Walk near Wellington Barracks, London. After a military funeral, his ashes were returned to Australia and placed in the Northern Suburbs crematorium, Sydney.