View over the deck of the 5528 ton British freighter, Turritella, from the German armed merchant ... 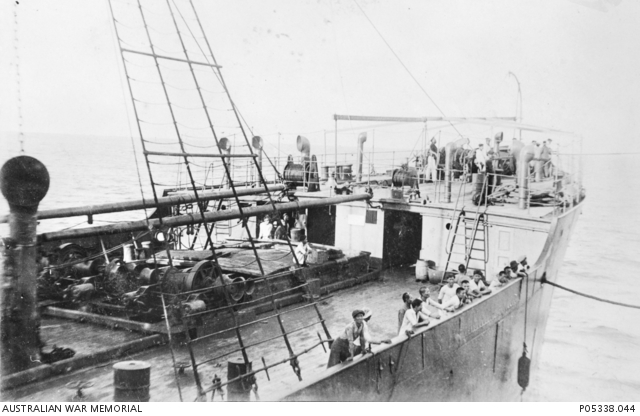 View over the deck of the 5528 ton British freighter, Turritella, from the German armed merchant raider, SMS Wolf. Crew members line the railings of the Turretella, which has just been captured by the SMS Wolf. Shortly after her capture, a prize crew was placed on board along with a 5.2cm gun and 25 mines. She was ordered to place her mines around Aden, and renamed SMS Iltis. During her mine laying operation, SMS Iltis was detected by the British cruiser, HMS Odin, and was scuttled by its crew on 5 March 1917. This image is from a collection relating to the voyage of the German raider, SMS Wolf (II), and was taken by an unidentified crew member. Previously a freighter of the Hansa Line, with a gross tonnage of 5809 tons, she was launched as ‘Watchfels’ and was renamed SMS Wolf when she was fitted out as an auxiliary cruiser. She was prepared for her role as an armed merchant ship with an armament that included six 150mm guns, one 105mm gun, three 52mm guns, four torpedo tubes and carried 458 mines, to be placed in Allied territory throughout her journey. SMS Wolf was also provided with an innovative new weapon, the Friedrichshafen FF.33e two seater biplane, an aircraft that was used with deadly success to scout out new targets for attack or to elude enemy threats. The raider was relatively slow, with a top speed of only 11 knots but her bunkers held 8000 tons of coal, giving her a huge cruising range of 32000 nautical miles at eight knots. On 30 November 1916, SMS Wolf sailed from Kiel, Germany, with a complement of 348 sailors and commanded by Fregattenkapitän (Commander) Karl August Nerger. During the 451 days she was deployed in Allied territory around Australia, New Zealand, New Guinea, South Asia and Africa, she destroyed 35 trading vessels and two war ships, amounting to approximately 110000 tons. She returned to Kiel on 24 February 1918 with 467 prisoners of war and substantial quantities of rubber, copper, zinc, brass, silk, copra, cocoa and other essential materials to the German war effort. SMS Wolf, without any support, had made the longest voyage of a warship during the First World War. On her return to Germany, the Kaiser presented every crew member with the Iron Cross and Fregattenkapitän Nerger was awarded the highest German decoration, the Pour le Mérite.