The captured German railway gun, known as the Amiens Gun, on display. On the side of the gun has ... 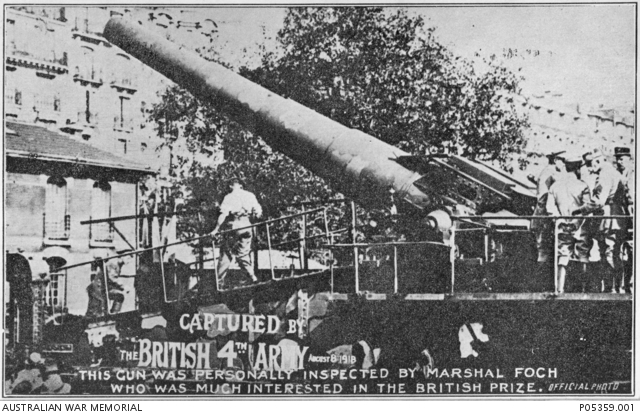 The captured German railway gun, known as the Amiens Gun, on display. On the side of the gun has been painted: "Captured by the British 4th Army August 8th 1918". The postcard's caption reads 'This gun was personally inspected by Marshall Foch who was much interested in the British prize'. The barrel was originally designed as a naval gun but was converted in 1917 for use as a railway gun. It was built by Fr Krupp of Essen and weighed 188 tonnes. The weight of a projectile was 302 kilograms. It was captured by Australian troops from 31st Battalion on 8 August 1918 at Harbonnieres near Amiens, France and was generally known thereafter as the Amiens Gun. The Germans used it to shell the railway marshalling yards at Amiens, disrupting the flow of men and materials to the front lines. The 28cm calibre gun was known as Little Bertha, and was 72 feet long and weighed 185 tons. After the First World War, the railway gun was shipped to Australia, displayed first at Central Station before coming to the Canberra railway station to be stored on a siding. During the Second World War the barrel, bogies and roof section were removed and the carriage was taken to the Proof and Experimental Establishment at Port Wakefield, SA, as a test bed for large calibre naval guns. The bogies were taken to Bandiana military base near Albury, NSW. The carriage and bogies were scrapped and disposed of during the 1960s. The barrel and roof section are all that remain, and these are now part of the National Collection held by the Australian War Memorial.