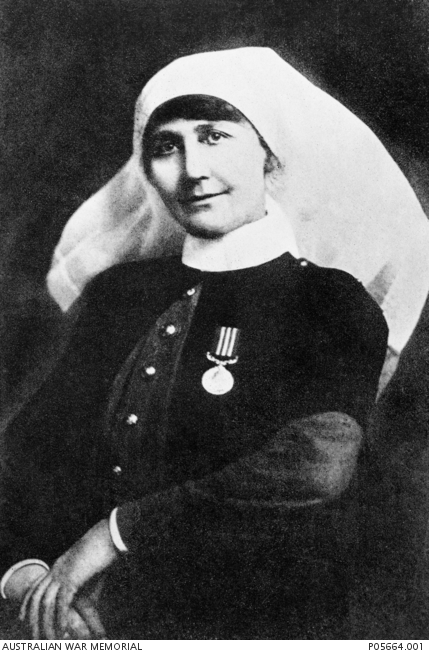 Studio portrait of Sister Rachael Pratt MM, of Carlton, Vic. Sister Pratt nursed at the Women's Hospital, Melbourne, before enlisting on 10 May 1915 in the Australian Army Nursing Service, Australian Imperial Force, as a staff nurse. On 18 May 1915 she embarked for London on RMS Mooltan. Staff Nurse Pratt went to Lemnos in August 1915 with the 3rd Australian General Hospital (3AGH). Staff Nurse Pratt continued to serve with 3AGH when it was transferred to Abbassia, Egypt, following the Gallipoli campaign, where she remained until 25 September 1916. Staff Nurse Pratt then served with the 1st Australian General Hospital in England, before joining the 1st Australian Casualty Clearing Station (1ACCS) at Bailleul, France. On the night of 3-4 July 1917, enemy aircraft attacked 1ACCS, where Staff Nurse Pratt was on duty and attending a patient. A bomb exploded near the tent, wounding Staff Nurse Pratt, who continued to attend her patient with a level of coolness and bravery that was said to set a conspicuous example to the patients and others. She was later admitted to hospital and underwent surgery on her wounded right shoulder and lung. The following day, Staff Nurse Pratt was promoted to the rank of Sister; she was awarded her Military Medal for "bravery in the field" on 19 October 1917, one of seven nurses to receive this award during the First World War. After recuperating in England, Sister Pratt served with the 2nd Australian Convalescent Depot at Weymouth and then the 1st and 2nd Australian Auxiliary Hospitals. Sister Pratt returned to Australia on 24 August 1918.