Street portrait of Herbert Crowther Foxton on Anzac Day. Born in Ireland in 1890, Foxton was a ... 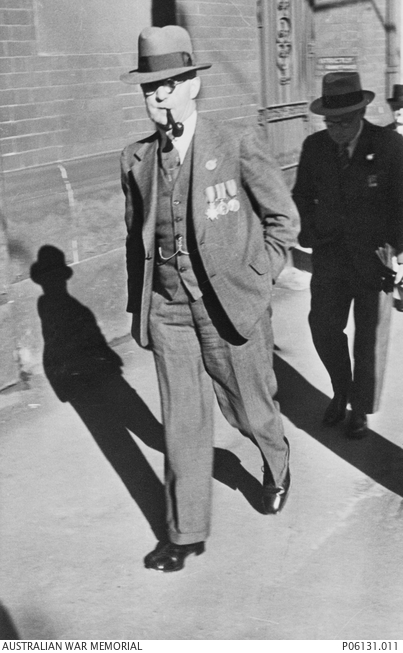 Street portrait of Herbert Crowther Foxton on Anzac Day. Born in Ireland in 1890, Foxton was a watchmaker in Queensland prior to enlisting in January 1915. With the service number 863, he embarked as a Sergeant (Sgt) with D Company, 25th Battalion, from Brisbane aboard HMAT Aeneas (A60) on 29 June 1915. Sgt Foxton served on Gallipoli then the Western Front where he reached the rank of Captain. In October 1917 he was wounded (gassed) and following treatment in England returned to his unit in France. On 17 July 1918 a shell explosion rendered him blind, unable to speak and with major wounds to his face; initially he was not expected to survive. He was transferred to the 3rd London General Hospital, Wandsworth, where he underwent 25 facio-maxillary operations by Doctor Warwick James. His face was rebuilt to a natural shape. His sight could not be restored and in March 1920 he was transferred to the St Dunstan's Hospital (a hostel for blind servicemen) where he learnt to read braille and use a typewriter and woodwork tools. Capt Foxton eventually returned to Australia late in 1921. Unable to gain employment he returned to England in 1923 and underwent operations by Sir Richard Cruise, ophthalmic consultant to King George V. The sight in one eye was partially restored allowing him enough vision to assist in mobility and providing some capacity to read. He returned to Australia in early in 1925 and in the same year married Ruth Love in Sydney. He had met Ruth in Dublin whilst doing his apprenticeship in watchmaking, then again in 1921 in Belfast whilst recouperating from his wounds. Herbert and Ruth had four children. During the Second World War Foxton worked for a time in an engineering factory in Homebush, NSW; this was his only paid employment after the First World War. In the 1950s his eyesight failed and he returned to using braille to read. Herbert Foxton died in 1984, aged 94.(Medical photographs in this series, P06131.001 - P06131.010, show the stages of reconstructive surgery on Capt Foxton's face. For other First World War images of Foxton see P10550.039 and P10550.614.