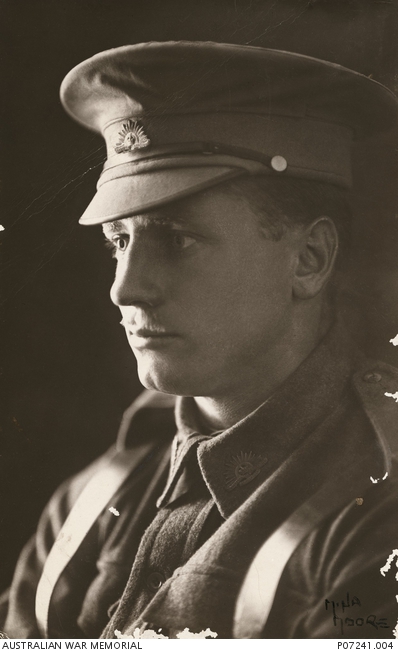 Studio portrait of 2nd Lieutenant (2nd Lt) Richard Horace Maconochie (Mac) Gibbs, 6th Battalion, of Colac, Vic. A university medical student prior to enlistment, 2nd Lt Gibbs embarked with the 14th Reinforcements from Melbourne on HMAT Themistocles (A32) on 28 January 1916. 2nd Lt Gibbs was later transferred to the 59th Battalion and promoted to the rank of Lieutenant (Lt). Lt Gibbs was killed in action on 19th July 1916, at Fleubaix, France, aged 23. He has no known grave and is commemorated at VC Corner Australian Cemetery Memorial, Fromelles, France. Lt Gibbs was posthumously awarded a Military Cross (MC) (gazetted London 26 September 1916), for his actions in battle shortly before his death. 'At Petillon on the 19th/20th July 1916, when his Company Commander was seriously wounded immediately prior to the order to charge Lieut. Gibbs took charge and led his men over the parapet. By his example the men were spurred on, and although advancing under a galling machine gun and rifle fire he kept his men moving steadily forward in perfect line and order. Lieut. Gibb's calm and collected manner gave his men the impulse necessary to carry them as far as it was possible to go'. Lt Gibbs brother, 154 Corporal John Harbinger Gibbs, Adminstration Headquarters, died of illness at his home in Colac, Vic, on 13 October 1917, after being repatriated to Australia from England. After the deaths of Richard and John Gibbs, their father Richard Horace Gibbs gave up his medical practice in Colac, Vic, and devoted his work to the medical care of sick and wounded soldiers who had returned to Australia. Richard Gibbs was gazetted a Major in the AIF and appointed Senior Surgeon at No 16 Australian General Hospital. Maj Gibbs was killed in a tram accident in Melbourne in July 1919.