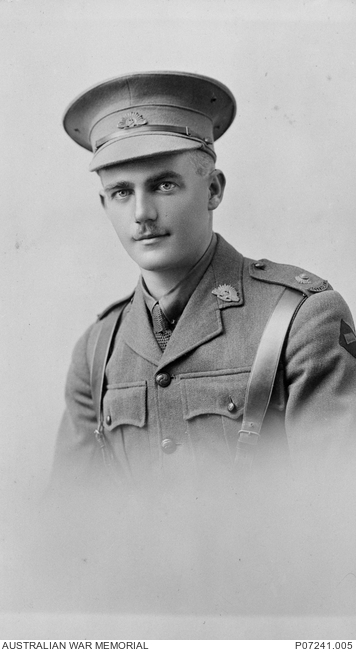 Studio portrait of 5027 Second Lieutenant (2nd Lt) Elliott Darcy Slade, of Wahroonga, NSW. An articled clerk and university student in civilian life, 5027 Private Slade enlisted in Hospital Transports Staff (No 1 Hospital Ship HMAT Karoola (A63), Australian Army Medical Corps, on 31 May 1915. The unit embarked from Sydney on HMAT Orsova (A67) on 14 July 1915. He returned to Australia on 4 December 1915 whilst on duty with No 1 Hospital Ship. He then transferred to the 2nd Military District for allotment to a combatant corps. On 30 September 1916 with the rank of 2nd Lt, Slade was appointed to the 33rd Battalion. 2nd Lt Slade embarked with the 7th Reinforcements from Sydney on HMAT Anchises (A68) on 24 January 1917. During 1917, 2nd Lt Slade transferred to the 63 Battalion, was promoted to Lieutenant, and then transferred back to the 33rd Battalion. Lt Slade was in charge of 4 Platoon during operations near Hangard Wood, France, when he was killed in action on 3 March 1918. He was aged 23.