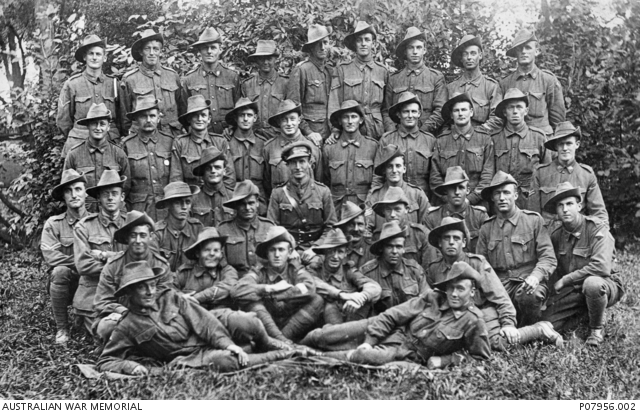 Outdoor group portrait of members of 5 Platoon, 22nd Battalion. Identified approximately centre (wearing a peaked cap and Sam Browne belt) is the Platoon Commander Lieutenant (Lt) Guy Osmond Greig, of Moonee Ponds, Vic. Lt Greig enlisted on 11 June 1915 and as a member of the 2nd Reinforcements he embarked from Melbourne aboard HMAT Demosthenes (A64) on 16 July 1915. He served on the Western Front in France and Belgium where he was killed in action on 17 September 1917, aged 28 years. Also identified third row, second from left, with arms crossed wearing a wrist watch and spectacles is 5117 Corporal William John Alfred Layburn. William Layburn sent this photograph home to his mother on 7 September 1917. On the reverse he wrote "This is our fighting strength when we go into the line this week. I am signaller to the officer Lt G O Greig so will have a decent time. 16 of these boys were through Bullecourt and 4 that were wounded are back again. As I told you before, 13 of us were left. I hope we have better luck this time". Ten days later Lt Greig was killed in action and on 28 August 1918, William Layburn was killed in action.