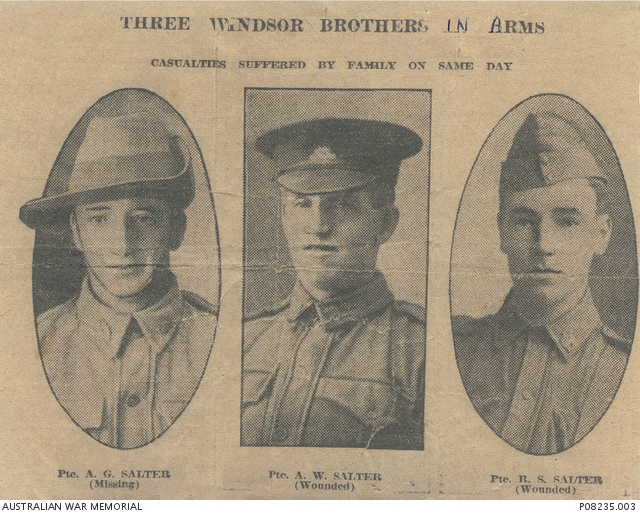 Composite portrait of the Salter Brothers, 5th Battalion, sons of Charles James Salter and Josephine Salter of Kent Street Windsor, Vic. All three brothers embarked from Melbourne on board HMAT Orvieto (A3) on 21 October 1914. All took part in the landing at Anzac Cove on 25 April 1915. This is the "same day" to which the newspaper headline refers. Left is 1065 Private (Pte) Arthur George Salter who is not recorded as "missing " on his service record. He was wounded and hospitalised for five weeks, rejoining his battalion at Gallipoli on 14 June 1915. He was, however, almost constantly ill from that time on, at first with gastro-enteritis and, in November 1915, with pleurisy. A few days later he was dangerously ill with pneumonia. Pte Arthur Salter was given a medical discharge and left Suez for Australia on 11 April 1916. Pte Alfred William Salter was killed in action during the landing at Anzac Cove, 25 April 1915. Pte Roy Stuart Salter was wounded in action at the landing. He rejoined his unit in June and was later transferred to the 60th Battalion for service on the Western Front. Pte Roy Salter was promoted to Lance Corporal on 15 July 1916 and killed in action at Fleurbaix, France, on 19 July 1916. A nephew of the Salter brothers, 117321 Leading Aircraftman William Roy Salter, 457 Squadron, served with the RAAF during the Second World War.