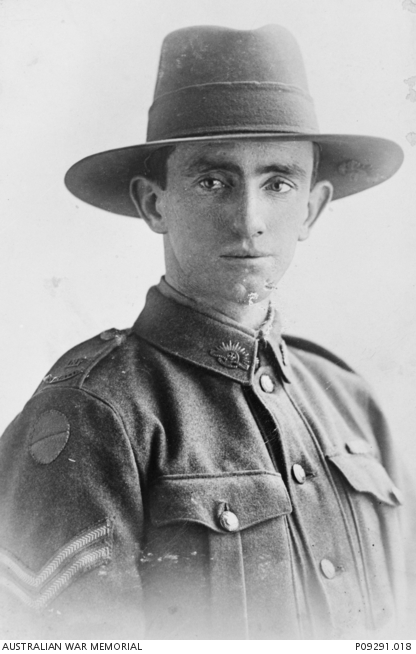 Studio portrait of 349 Corporal (Cpl) Justin Thomas Augustin Hanley MM, 50th Battalion from Stockdale, South Australia. A 22 year old mechanic prior to enlisting on 19 August 1914, he embarked for overseas as a Private with G Company, 10th Battalion from Adelaide on 20 October 1914 aboard HMAT Ascanius. While serving at Gallipoli, he was promoted to Lance Corporal on 15 July 1915 and then taken ill and evacuated to Egypt on 2 August 1915. He remained in Egypt and transferred to the 50th Battalion on 26 February 1916 and went with them to France in June 1916. While serving in France, he was awarded a Military Medal for conspicuous bravery on operations near Mouquet Farm between 12 and 15 August 1916. After holding temporary ranks, he was promoted to Corporal on 1 March 1917 and to Sergeant (Sgt) on 24 May 1917. Sgt Hanley was killed in action at Westhoek Ridge, Belgium on 27 September 1917 and is commemorated on the Menin Gate Memorial at Ypres, Belgium with others who have no known grave.