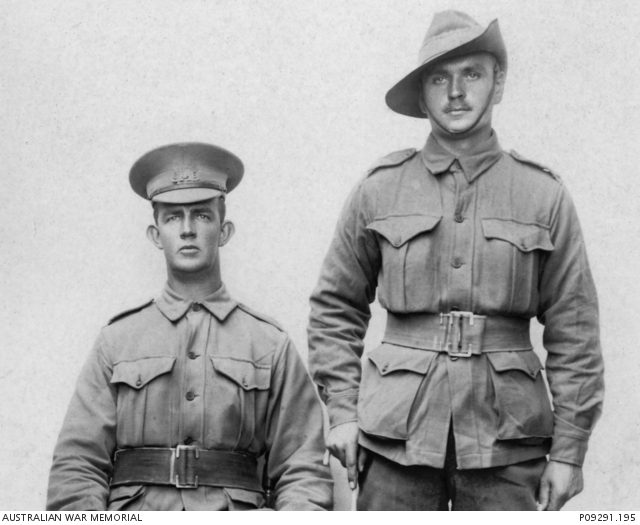 Studio portrait of 920 Private (Pte) Alexander Stewart Donaldson, seated, and 877 Pte Richard Eric Allison, both of 32nd Battalion. Donaldson a labourer from South Bunbury, and Allison a clerk from Victoria Park, Western Australia, prior to enlistment, embarked from Adelaide aboard HMAT Geelong on 18 November 1915 for Suez. Their battalion relocated to the Western Front, France, during June 1916. Pte Allison was wounded in action on two occasions, the first through gunshot wounds in September 1917 and the second by gassing in May 1918 which required evacuation to England for treatment. He rejoined his battalion in France a week before the end of the war. Pte Allison returned to Australia for discharge on 4 August 1919. Pte Donaldson was wounded in action on 20 July 1916 during the Battle of Fromelles and was evacuated to England for treatment and recuperation before rejoining his battalion in late November 1916. Pte Donaldson was wounded in action on a second occasion at Polygon Wood, Belgium, on 29 September 1917 and died of these wounds the following day and is buried in the Lijssenthoek Military Cemetery, Belgium. He was aged 26 years. His younger brother, 55 Sergeant Harry Donaldson, 28th Battalion died of wounds received in action near Montauban, France, on 10 November 1916. He was aged 24 years.