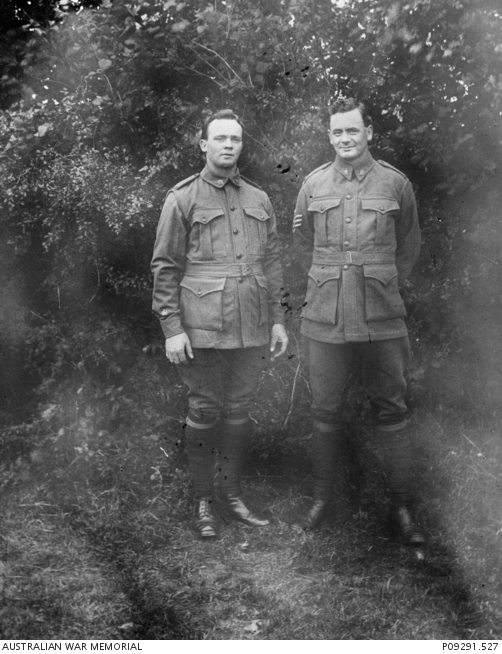 Outdoor portrait of, 414 Company Sergeant Major (CSM) Henry Martin, (at left) and 2474 Company Quarter Master Sergeant (CQMS) Harold Andrew Trezona, 70th Battalion, Windmill Hill, England. CSM Martin a fitter from Rosewater, South Australia, prior to enlistment, embarked as a Corporal (Cpl) with 32nd Battalion, B Company from Adelaide on HMAT Geelong (A2) for Suez. The battalion relocated to the Western Front, France, during June 1916. Cpl Martin was promoted to Temporary Sergeant in late July 1916 and then to Sergeant (Sgt) three months later. Sgt Martin was accidentally wounded in the field and evacuated to England for treatment and recuperation. While recuperating he attended the School of Instruction while on duty with 70th Battalion and on completing the course served as Company Sergeant Major from late August to mid September 1917. He reverted to the rank of Sergeant on transfer back to the 32nd Battalion and proceeding to France in mid November 1917. Sgt Martin continued to serve with his battalion until the end of hostilities returning to Australia for discharge on 19 June 1919. CQMS Trezona, a farmer from Moonta, South Australia, embarked as a Private (Pte) with the 7th Reinforcements of the 32nd Battalion from Adelaide on 23 June 1915 aboard HMAT Kanowna (A61) for Suez. In late July 1915 he was hospitalised and subsequently returned to Australia for treatment and then returned to Egypt in early June 1916. His battalion relocated to England to the 3rd Training Battalion before proceeding to France in late September 1916. He was appointed Lance Sergeant in mid-October 1916 and a fortnight later was hospitalised with illness and evacuated to England for treatment and recuperation. While recuperating he served with 70th Battalion at Windmill Hill and was promoted to Sergeant serving as Company Quarter Master Sergeant. Sgt Trezona returned to France to re-join the 32nd Battalion on the western Front near Messines in mid-November 1917. Sgt Trezona was killed in action near Corbie, France, on 30 July 1918. He has no known grave and he is commemorated on the Villers-Bretonneux Memorial. He was aged 27 years. Sgt Trezona’s older brother, 3960 Pte Wiliam James Trezona was killed in action near Ypres, Belgium, on 6 November 1917. He also has no known grave and is commemorated on the Ypres (Menin Gate) Memorial. He was aged 31 years.