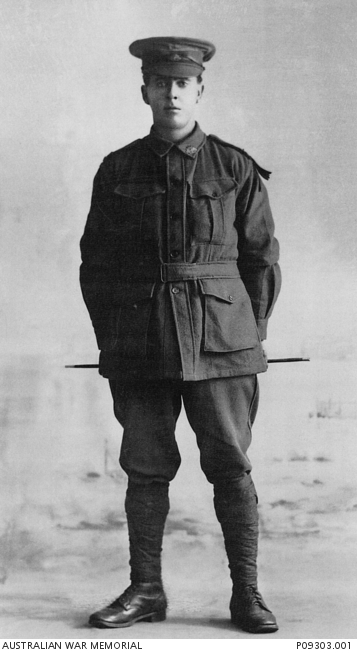 Studio portrait of 5665 Private (Pte) Ernest Corby, 3rd Battalion, of Tuena, NSW. A shearer prior to enlisting in January 1916, Pte Corby embarked with the 18th Reinforcements from Sydney on board HMAT Kyarra (A55) on 3 June 1916. He served in Belgium and France from September 1916. Pte Corby was appointed Lance Corporal in May 1917 and Corporal (Cpl) in October. Cpl Corby was killed in action in France on 14 April 1918, aged 32. He originally had no known grave. In 2003 a farmer uncovered the remains of four Australian soldiers in a field near the village of Merris. After historical research and forensic investigation in France and Australia, two of the four soldiers were believed to be Lieutenant Christopher Henry Duncan Champion and 5665 Corporal Ernest Corby. It was not possible to identify the other two soldiers. On 22 April 2005 the four soldiers were formally buried in the Commonwealth War Graves Cemetery at Outtersteene, France.