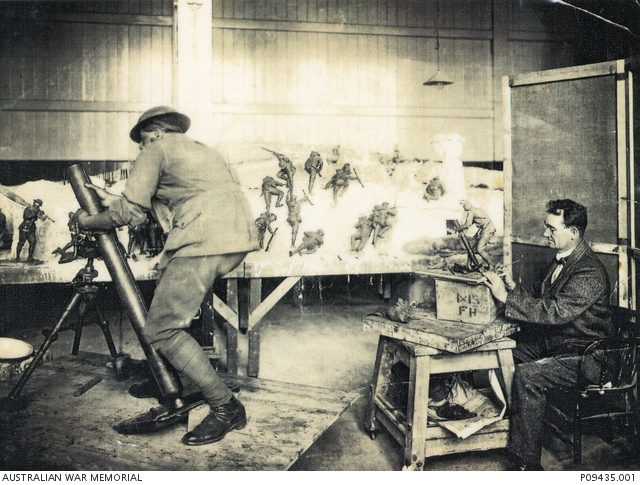 Artist Web Gilbert sculpts a model of 1549 Private (Pte) William Roy Guest for the Mont St Quentin Diorama of the Australian War Memorial. Gilbert was largely a self-taught artist who joined the AIF and became an honorary Lieutenant of the Australian War Records Section in December 1918. He travelled throughout France making studies and models of battlefields and significant sites for dioramas, and was made Head of the modelling section with the job of constructing the Mont St Quentin diorama. The model, Pte Guest, enlisted on 19 December 1914. He claimed his age to be 19 years, but was 14 years old at the time. He embarked from Fremantle aboard HMAT Itonus (A50) with the 3rd Reinforcements of the 11th Battalion on 22 February 1915. He transferred to the 1st Pioneer Battalion on 11 March 1916 and was wounded in action on 31 July 1916. He rejoined his Battalion on 22 November 1917 and received the Belgian Croix de Guerre medal on 5 October 1918. He was promoted to Corporal on 19 October 1918, however reverted back to Pte on 8 December 1918. Pte Guest returned to Australia on 18 December 1918. Guest went on to serve in the Second World War as a Warrant Officer (service number VX7412) with the 2/5th Battalion.