Remains of Australian soldiers including a helmet, skull and pelvis bone, killed during the ... 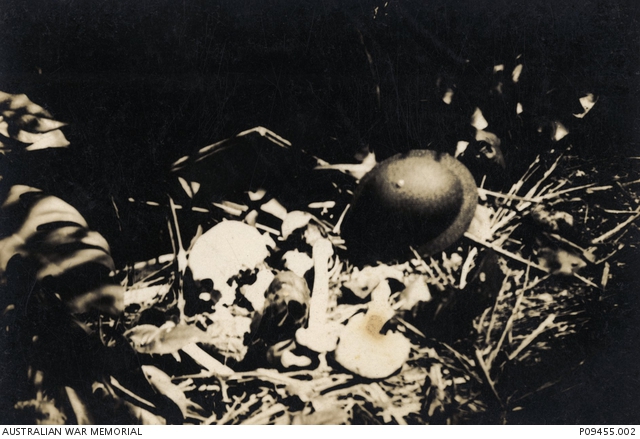 Remains of Australian soldiers including a helmet, skull and pelvis bone, killed during the retreat from Rabaul on 4 February 1942. Approximately 160 soldiers were massacred by the Japanese in a series of separate incidents at the Tol Plantation in New Britain on 4 February 1942. The soldiers were retreating south, alone or in small parties, from Rabaul following the successful Japanese attack on 23 January 1942. After crossing the Bainings Mountains many men decided to head towards Tol and Waitavalo, while others continued heading south. On 3 February 1942, the Japanese attacked Tol, capturing a number of men as they tried to escape from the plantation. Others were captured when they were unable to cross the rivers in the area around Henry Reid Bay and at least one group surrendered. The men, now Prisoners of War (POWs) were forced to surrender all of their personal belongings and were tied together in groups of two or three. They were asked in sign language by the Japanese if they preferred to be shot or bayoneted. The groups were then taken into the jungle where they were shot, bayoneted or burnt alive. Six men survived the massacre and with the help of local natives were able to make contact with the 150 others from Rabaul who had evaded the Japanese and gathered around Palmalmal Plantation. Caption written by VX149141 Pte Ivan Harold Jones reads 'Massacre A Digger'.