'Major Adams of Melbourne was out acting CO during the Ypres offensive for Ridge in [space] 1917. ... 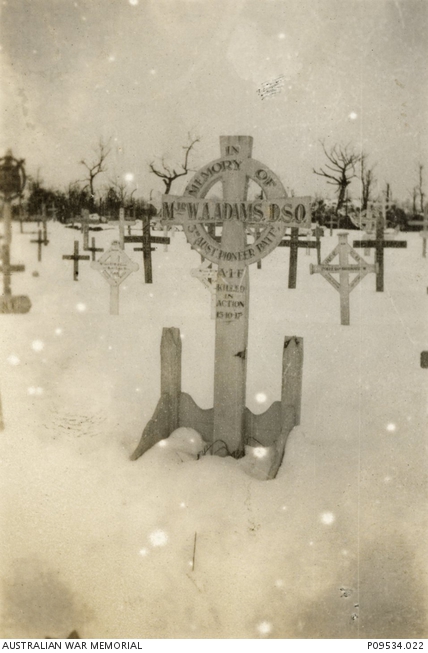 'Major Adams of Melbourne was out acting CO during the Ypres offensive for Ridge in [space] 1917. He was killed on [space] by a small piece of shell which hit him in the shoulder.' Original cross on the grave of Major (Maj) William Affleck Adams DSO, in Ypres Reservoir Cemetery (also known as Prison Cemetery). Maj Adams was killed in action on 15 October 1917. (One of a collection of photographs belonging to Lieutenant (Lt) Robert Trevor Williams and taken by Lt William Wyatt Harvey during a battlefield tour of France and Belgium, January 1919, by officers of the 3rd Pioneer Battalion. The original caption quoted in single inverted commas is by Lt Williams.)