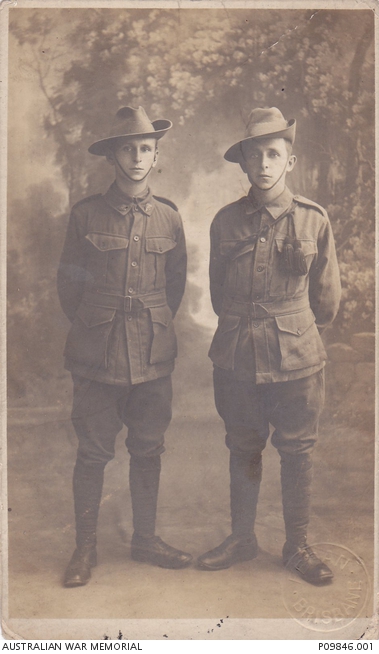 Studio portrait of brothers 121 Private (Pte) Allen Browning (left) and 137 Pte Henry Browning, 41st Battalion. Labourers from Brisbane, Qld, Allen and Henry enlisted together on 22 December 1915. They embarked on 18 May 1916 with A Company, aboard HMAT Demosthenes (A64). On 24 April 1918 Henry was killed by a shell burst during an early morning bombardment at Vaux-Sur-Somme. Reports describe the moment when Henry was hit, standing beside his brother Allen handing out rations at the reserve line near the village of Vaux. Henry was buried at Bonnay Communal Cemetery in France. Allen survived the war and returned to Australia in July 1919.