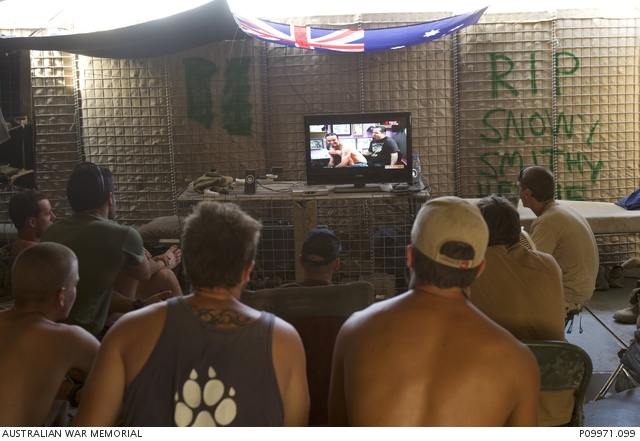 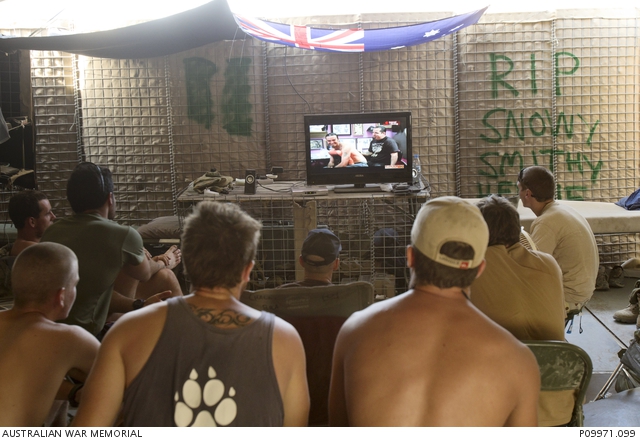 On the HECSO walls at Patrol Base Razaq, Mentoring Team-Delta (MT-D) commemorate 2CER (2nd Combat Engineer Regiment) engineers Sapper's Jacob "Snowy" Moerland and Darren Smith and their EDD Herbie who were killed by an IED on June 7th, 2010. One of a series of photographs taken by Gary Ramage while embedded with 6th Battalion, The Royal Australian Regiment (6RAR) in Afghanistan from June to August 2010. 6RAR was deployed to Afghanistan in January 2010 as part of the wider ADF 1st Mentoring Task Force (MTF-1). At an operational level, this deployment was particularly significant as 6RAR's responsibilities were synchronised with the withdrawal of Dutch forces from Uruzgan Province. As part of this handover, additional Operational Mentor and Liaison Teams (OMLT) were formed and MTF-1 gradually assumed responsibility for all five Kandaks (Battalions) and the Headquarters of the Afghan National Army 4th Brigade in Uruzgan. Due to the subsequent organisational restructure and growing significance of the OMLT program, the men of D Company 6RAR were reorganised and retitled in mid 2010 as Mentoring Team-Delta (MT-D). In July 2010, Mentoring Team Delta began operations in the Deh Rawood Valley Region, approximately 60km west of Tarin Kowt. The Coy HQ was based at Forward Operating Base (FOB) Hadrian, its first priority being the movement of stores, equipment and supplies, and the establishment of security points. The photographer Gary Ramage, a former member of 6RAR, and formerly a long-serving military photographer with the ADF's 1st Joint Public Affairs Unit, accompanied MT-D to Patrol Base Razaq and recorded their first three weeks of operation.