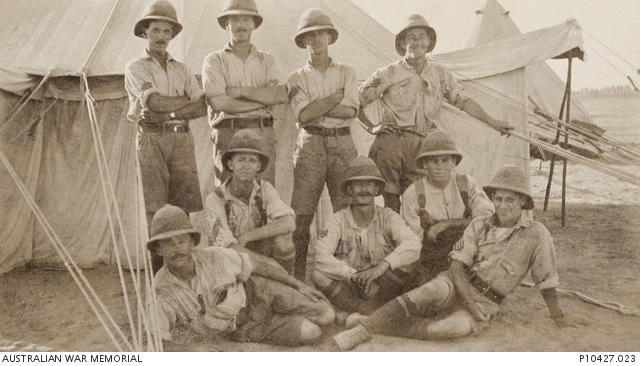 Informal outdoors portrait members of B Company, 27th Battalion taken during training. Identified are, probably left to right, back row: 385 Sergeant (Sgt) William Crowe McMillan; 282 Sgt Harrison McDouall Campbell; 290 Sgt David Wallis Caldwell; 270 Sgt Ernest William Bates. Front row: 255 Sgt Frank Brown; 315 Sgt Fred Gaskell; 311; Sgt William Herbert Fisher; 469 Sgt Horace John Townley; 483 Sgt Albert Frederick Wood. All men embarked from Adelaide on HMAT Geelong on 31 May 1915. Sgt McMillan, a native of Beath, Scotland, was a bricklayer from Rosewater, SA prior to enlistment and became ill whilst serving on the Western Front and was returned to Australia. Following his recovery, he returned overseas and, after serving in France, returned to Australia on 20 June 1919. Sgt Campbell, a native of Cromwell, NZ, was formerly a detective in the WA Police Force. He was promoted to Lieutenant whilst serving in France and awarded the Military Cross. Later wounded in action, he died as a result of his wounds on 23 November 1916 and was buried in the Heilly Station Cemetery, Mericourt-L'Abbe, France. Sgt Caldwell was a carpenter from Semaphore, SA prior to enlistment and was promoted to Lieutenant whilst serving in France. On 2 March 1917 he was killed in action and was buried in the Warlencourt British Cemetery, France. Sgt Bates was a letterpress machinist from Adelaide prior to enlistment. Whilst serving in France he was wounded in action and, on 7 August 1916, he died as a result of his wounds and was buried in the Puchevillers British Cemetery, France. Sgt Gaskell, a university student from Stirling East, SA prior to enlistment was wounded in action in action in France and returned to Australia for home service on 22 July 1917. Sgt Fisher, a bricklayer from Hackney, SA prior to enlistment, later transferred to the 2nd Pioneer Battalion where he was wounded in action. Subsequently promoted to Second Lieutenant, he was wounded in action for the second time and returned to Australia with the rank of Lieutenant on 8 April 1919. Sgt Townley, a collar maker from Norwood, SA prior to enlistment, was later promoted to Warrant Officer Class 2 and on 14 October 1916, aged 22, was killed in action at Ypres and was buried in the Railway Dugouts Burial Ground, Belgium. Two brothers, 1103 Private Alfred George Townley and Lieutenant Roy Townley also served with the 27th Battalion. Sgt Wood, a clerk from Parkside, SA, was the Company Quartermaster Sergeant before being promoted to Lieutenant. On 11 June 1918, he died of wounds received in action and was buried in the Franvillers Communal Cemetery Extension, France.