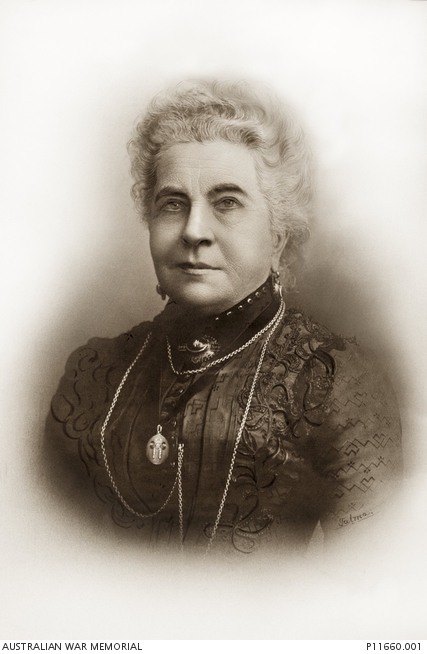 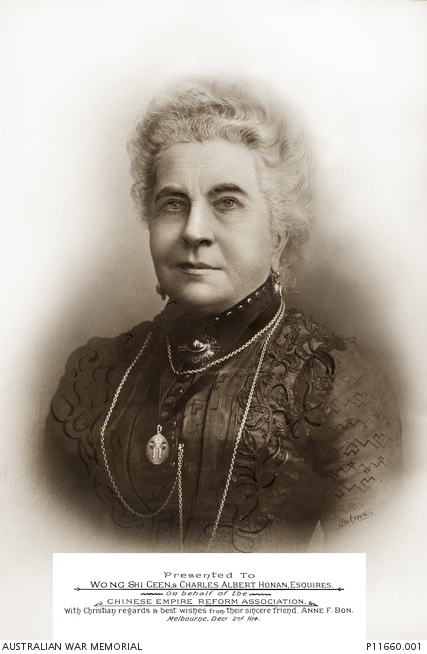 Studio portrait of Mrs Anne Fraser Bon, philanthropist and owner of 'Cocky'. Born in Dunning, Perthshire, Scotland in 1838, Anne Fraser Dougall married John Bon, a wealthy pastoralist from 'Wappan' (Wappang) on the Delatite River near Mansfield, Victoria. Following his death in 1868, Anne Bon took over the management of Wappan, in addition to raising her five children, and eventually became one of the wealthiest women in Victoria. She was a noted philanthropist, with a keen interest in Aboriginal welfare, various charities, the Salvation Army and mental health. This photo was presented to the Chinese Empire Reform Association by "their sincere friend, Anne F. Bon", after she established a school for Chinese children in Melbourne. During the First World War, Anne Bon donated an ambulance to the Belgian Army, as well as lending Cocky to No 1 Rest Home, Melbourne. Each Christmas, from 1919 until her death in 1936, she gave every Victorian soldier who had been blinded in the war a gift of twenty pounds. She died, aged 98, on 5 June 1936 and is buried in Kew cemetery. See also P09491.001, H04150 and RELAWM08024.