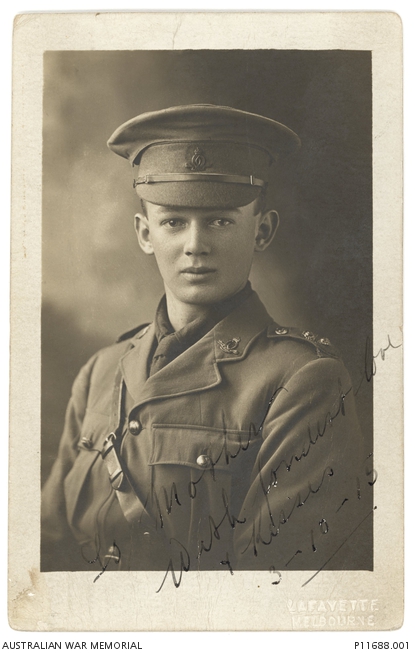 Studio portrait of Lieutenant (Lt) Kenneth Malcom (Ken) Mortimer, Royal Military College (RMC), Duntroon, in RMC uniform with lapel and cap badges. Lt Mortimer was an enthusiastic member of the Duntroon Photographic Club and took photographs of his fellow officers. He graduated from Duntroon in June 1915 and was appointed to the AIF on 1st July 1915. He embarked with Headquarters Staff, 29th Battalion, from Melbourne aboard HMAT Ascanuis (A11) on 10 November 1915. He was promoted to Captain in Egypt before serving on the Western Front. Captain Mortimer was killed in action near Armentieres, France, on 20 July 1916, aged 20.