Informal portrait of five RAAF fighter pilots on board the troopship Ceramic bound for Liverpool, ... 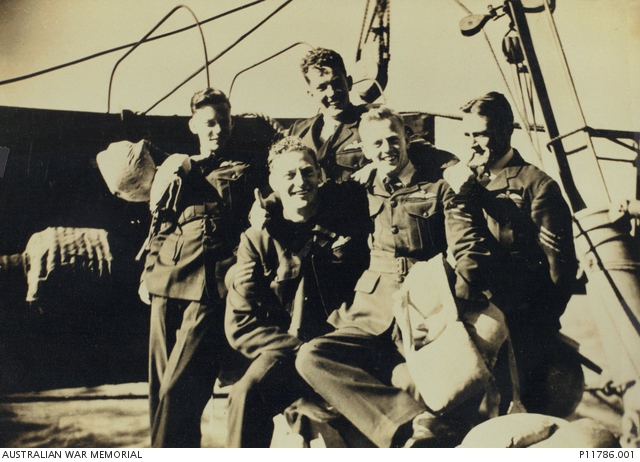 Informal portrait of five RAAF fighter pilots on board the troopship Ceramic bound for Liverpool, UK. Identified: 403476 Walter (Wally) Parks (left back row), 403426 William Walter (Bill) Evans (right), 403439 Bruce Astor Schaefer (left bottom row), 403305 Warrant Officer Harry Bastian (middle) and 403610 Lewis (Lew) Trunley (right). Six fighter pilots from New South Wales were among those who embarked in Sydney on the small troopship Ceramic on 25 October, 1941 bound for Liverpool, Great Britain. They first went to Wellington, New Zealand where they waited for about two weeks for some New Zealand airmen to join them. While in Wellington the six Australian airmen spent their time in The Grand Hotel where their ‘thirst was held in check by a very charming Maori lass, Mary’ (the barmaid) (Bastian).
Pilot Officer Schaefer of Armidale, NSW, and later 164 Squadron RAF was killed when he flew into a tree while training in Scotland on 18 August 1942. Flight Sergeant Parks of Artarmon, NSW, was killed in Malta while attached to 229 Squadron RAF on 29 October 1942. He was attempting to take off during an enemy air raid when he hit a rolling machine (another Hurricane) and crashed. Flight Sergeant Trunley of Ashfield, NSW, was killed on operations with 64 Squadron RAF in England on 22 May 1943. Pilot Officer Evans of Hamilton, NSW, was killed when he attempted to land his plane during a Hurricane test flight in Egypt while attached to 94 Squadron RAF on 1 August 1943. He was testing an aircraft which was meant to be fixed. On take off the seat of the Hurricane was in an elevated position to give you better vision, this then dropped back down in flight. When Bill dropped his back down, it jammed the controls of the plane to a fair extent. Those in charge on the ground told him to bail out, but Bill insisted that he could land it, he didn’t and was killed in the crash.’ The photographer, 403387 Flight Sergeant Harold Victor Warnock of Merrylands, NSW, and 64 Squadron RAF, was killed over the English Channel on his first raid to France on 8 June 1942. He broke formation to attack a decoy set up by the Germans and was shot down. He was flying a Hurricane.
Warrant Officer Bastian, of Glebe, NSW, and later 33 Squadron RAF wrote: ‘The farewell we received from the Wellington people was nothing short of exceptional. Massed bands played for over a couple of hours and a large percentage of the population turned out to bid us farewell…….. on the way back (post-war in 1945) the ship called in at Wellington and I walked into the same bar and Mary, the same lass who had served us on the way over, said “Hello Harry” and asked about the five others by name. Unfortunately, they could not be with us in the flesh. These five men had all been killed serving their country, Bruce Schaefer, Walter (Wally) Parks, Lewis (Lew) Trunley, William (Bill) Evans and Harold Warnock".
‘It certainly has given me a lot of food for thought over the years as to how lucky I had been to be the one out of that group of six to survive,’ wrote Bastian who was shot down in the Middle East on 9 October 1942 and became a POW