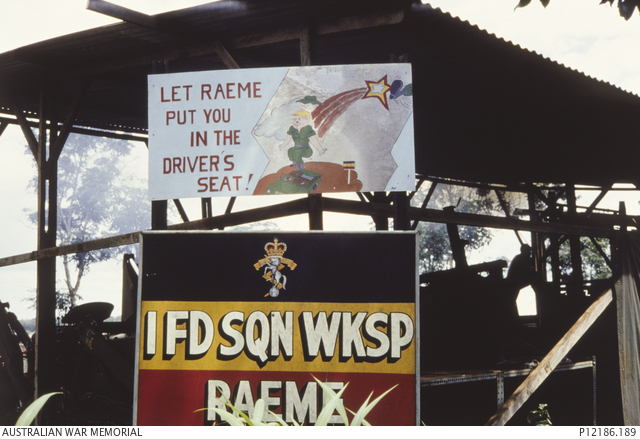 Unit board for the 1 Field Squadron Workshop, Royal Australian Electrical and Mechanical Engineers (RAEME). One of 477 colour 35mm transparencies taken or collected by 2784336 Signalman (Sig) Stuart Lindsay Weller, 104 Signal Squadron, relating to his service in Vietnam between 1967 and 1968. Sig Weller remembers: "They were next door to 104 Signal Squadron, just on the other side of the pathway to Kangaroo Pad. So close were they, we managed, with a little bit of jiggling, to open a gap in the concertina barbed wire behind our tent and if we didn’t want to watch our movie one night, we could slip through our wire and enter through an official gate they’d created in their wire and watch their movie. ... They’d have a go at anything that was mechanical. They were also a pretty noisy bunch as well ... anything mechanical meant engines, and they were repairing and then test running them every day. RAEME also had an armourer who fixed guns and that also meant these were test fired almost daily. Normally that would be fine, but if you worked shift work in the 104 Signal Squadron’s Signal Centre as I did, you really needed to sleep during the day."