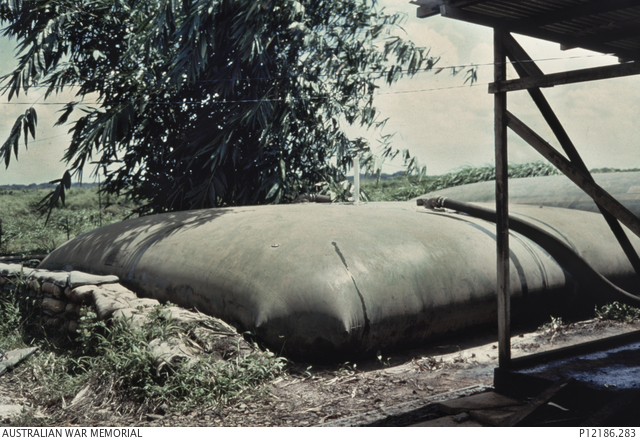 Fuel storage bladder at Luscombe Airfield, Nui Dat, Vietnam. One of 477 colour 35mm transparencies taken or collected by 2784336 Signalman (Sig) Stuart Lindsay Weller, 104 Signal Squadron, relating to his service in Vietnam between 1967 and 1968. Sig Weller notes: "I guess early in the life of Nui Dat and Luscombe no thought had been given to the task of refuelling helicopters onsite, as they didn’t stay overnight and so it could be expected it would be done at their home base. But as the size of Australia’s commitment to the conflict grew, operations became bigger and, as a result, helicopters were used more ... it became more convenient to refuel the choppers at Nui Dat rather than have them fly off to their bases and then return."