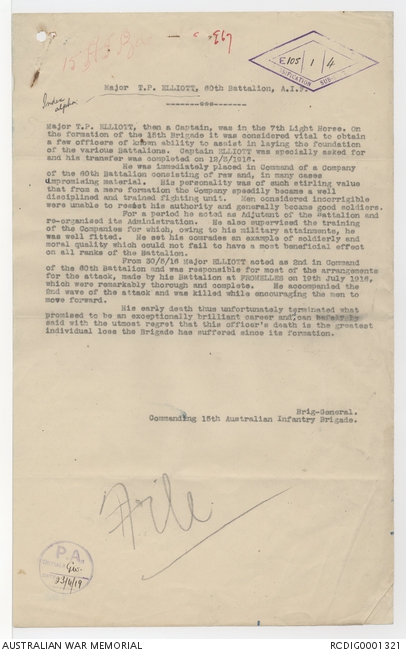 Service biography relating to the First World War service of Major Thomas Patrick Elliott, 60th Battalion. Written by the commanding officer of the 15th Infantry Brigade, Brigadier General Harold Edward (Pompey) Elliott, it provides a brief history of Thomas Elliott’s service with the 7th Light Horse Regiment, and his transfer to the 60th Battalion upon Pompey’s request and the positive effect of his leadership on the battalion. It also covers Elliott’s role in the preparations at Fromelles as second-in-command of the 60th Battalion and the manner of his death in the fighting at Fromelles on 19 July 1916. Pompey clearly expresses his high regard for Elliott, his qualities as a leader, and the enormity of his loss.