Handkerchief embroidered with signatures of Dutch 'Comfort Women' at the 'House of the Seven Seas', Semarang, Java 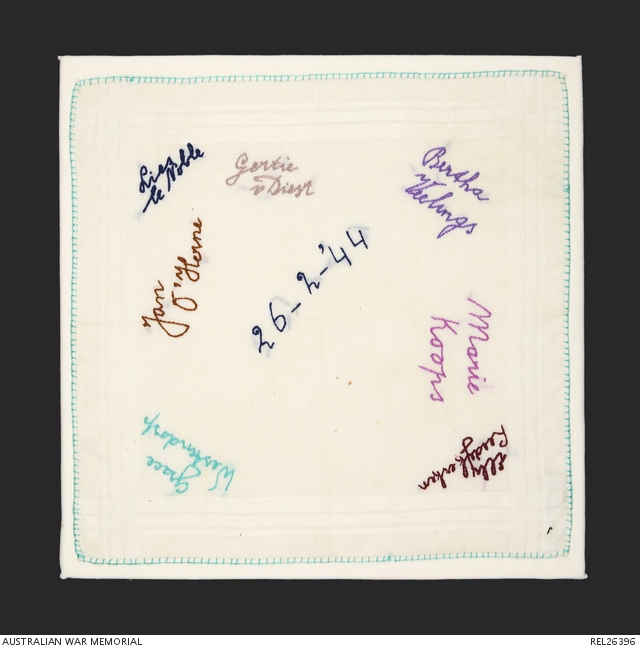 Woman's white cotton handkerchief with a three band border. The edges have been decorated with aqua coloured button-hole stitching. Seven signatures in shades of blue, brown and violet, and the date '26-2-'44', have been executed in stem-stitch embroidery.

Associated with Jan Ruff-O'Herne (nee O'Herne) who was born in 1923 at Bandoengan, the capital of Central Java. On 8 March 1942 the Japanese Imperial Army captured Java. Jan, her mother Josephine and two sisters Fien & Celeste, were interned in a prison camp in a disused and condemned army barracks at Ambarawa in Central Java. The camp held about 3,000 Dutch women and children. On 26 February 1944, a truck arrived at the camp, and all the girls seventeen years old and above were forced to line-up in the compound. The ten most attractive girls, including Jan O'Herne, were selected by Japanese officers and told to pack a bag quickly. The first things Jan packed were her rosary beads, a crucifix, prayer book, and bible because she said 'at that moment they seemed to be the most important things, whatever would happen to me they would be my strength'. She also threw in some clothes. On the way to the gate, the women in the camp tried to give the girls little gifts, and she was given this handkerchief.

The girls were taken forty-seven kilometres to an old Dutch colonial house at Selarang, surrounded by barbed wire. Seven of them were taken into the house, while the others went on to another destination. The handkerchief was signed by the seven girls who stayed at the house, subsequently known to the Japanese as 'The House of the Seven Seas'. Communication with their captors was difficult because neither group spoke the others language, but the Japanese managed to convey to the girls that they had been placed in a military brothel and were now 'comfort women'.

On their first morning at the house their photographs were taken, and pinned on the front verandah which was the reception area. Japanese personnel could then select a girl from these photographs. Over the next four months the girls, all virgins, were repeatedly raped and beaten, day and night. If they became pregnant, they were forced to have miscarriages. The doctor who visited the girls at the house also raped them, and conducted his examinations in a room with the windows and doors removed. He was accompanied by Japanese personnel who had been requested to watch. At the end of four months, the seven girls were moved to another camp, at Bogor in West Java, and reunited with their families. This camp was exclusively for women who had been put into military brothels, and the Japanese warned the inmates that if anyone told what had happened to them, they and their family members would be killed.

After several months, the O'Hernes were transferred to a camp at Batavia (Djakarta). This camp was liberated on 15 August 1945. In 1946, Jan O'Herne married Tom Ruff, who had served with the 23rd Indian Division and helped to guarding the Batavia camp from Indonesian Freedom Fighters after its liberation. The couple emigrated to Australia from England in 1960. Mrs Ruff-O'Herne spoke at the International Public Hearing of Japanese War Crimes in Tokyo on 9-10 December 1992, at the invitation of the Dutch organisation 'The Foundation of Japanese Honorary Debts'.