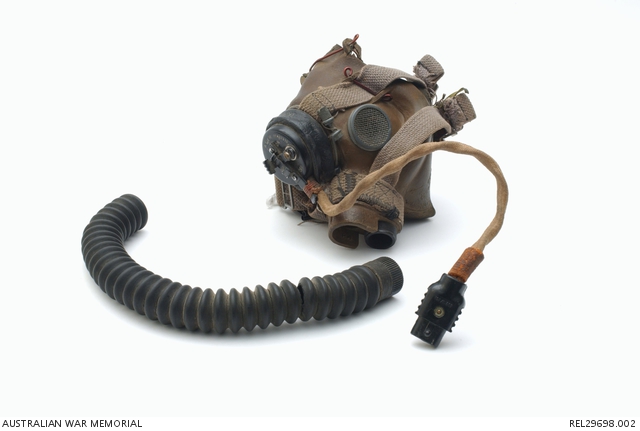 Type 'G' green rubber oxygen mask with built-in Type 26 magnetic microphone. The mask is lined with brown chamois leather, and has blue/grey elastic straps for attachment to a flying helmet. The left hand cheek of the mask has a mesh covered valve to allow the passage of ambient air. Raised markings on the mask read 'A M SMALL' (size) and 'DETACH TUBE HERE' with an arrow indicating the location point. The microphone has a black painted aluminium circular front with a rotating On/Off switch, and is impressed '10A/12570'. A black rubber seal holding the microphone in place is marked '10A/12574'. An insulated lead emerging from the base of the microphone ends in a plug for attachment to a flying helmet. Below the microphone, on the base of the mask, are inlet and exhaust valves for the oxygen supply and the black rubber oxygen hose which should attach to the inlet valve is detached.

This leather flying helmet and oxygen mask was worn by Sergeant Robert 'Alf' Cowley of Queensland during his service with 218 Squadron, RAF. Having served with the 2/2 Anti Tank Regiment, 7th Australian Division in Syria during 1941 in action against the Vichy French, Cowley decided to join the RAF in September 1942 and flew Lancasters with this squadron until the end of the war. The Type 'G' oxygen mask entered RAF service in 1943. Its main advantage over earlier masks was in the channeling of cool fresh oxygen into the upper part, while carrying warm exhaled air out at the bottom. Together with the new chamois lined rubber construction, this largely alleviated the condensation problems experienced with earlier masks. The Type 'G' was extensively used by RAF and RAAF aircrew for the remainder of the war, and remained in service well afterwards.