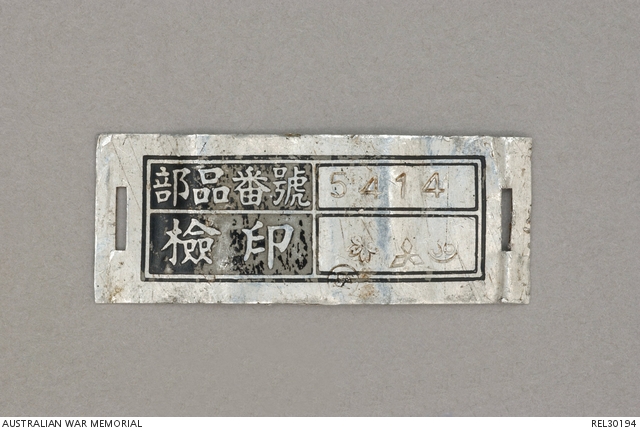 This small aluminium data plate displays two lines of entry printed in black with an adjoining space for stamped or impresed details. The top line translates as 'Part number' with the stamped number '5414' adjacent. The lower line literally translates as 'Inspection seal' and is associated with manufacturer and part approval. Four symbols have been stamped into this section: a Japanese cherry blossom (Sakura); a Mitsubishi symbol, plus two other symbols of indeterminate meaning; the final, lower one is likely to be an inspector's unique stamp, or Hanko. Each end of the plate has a slot cut into it, allowing for the plate to be wrapped and fastened around a electrical cable grouping. The reverse of the plate shows evidence of folding and regular discolouration which accounts with its purpose.

This data plate was removed from a Mitsubishi Betty bomber shot down over Darwin by Squadron Leader Dick Cresswell. The official history states: 'In the last week of November [1942] the Japanese carried out three fairly heavy night raids on Darwin. Again and again in the last few weeks fighters of No. 77 Squadron had tried to intercept night raiders. On the night of the 23rd when 18 medium bombers were over the town, the squadron's persistence was rewarded; Squadron Leader Cresswell shot down a bomber.'

Cresswell's combat report states that his attack was made just after 5 am commencing at about 22,500 feet (6,858 metres) on a v-formation [or vic] of three Mitsubishi G4M Betty bombers travelling south. He had been able to make contact with the bombers 'visually guided by AA [anti aircraft] fire and searchlights' and attacked 'from below on port rear quarter firing at 200 yds (183 metres), a raking burst across the whole Vic.' The three Bettys took evasive action, turning sharply to port 'and in doing so starboard aircraft became detached. The remaining 2 Bettys returned fire from side blisters and rear turret, fire erratic registering no hits.' Cresswell concentrated his attack on the detached bomber, making another two attacks: 'second attack on rear port quarter and followed through stern to starboard quarter.' Using his tracers as a guide, Cresswell noted his fire was 'seen to enter starboard engine and top of wing, which caught fire. Third attack made from above on starboard rear quarter. Tracers entered mid wing section. Enemy aircraft exploded in air about 16,000 feet (4,877 metres).' The remains of the Betty were not discovered for a week, and when recovered, there were found to be nine bodies - four more than the normal complement of crew.

13494 Corporal John Errol, who was then serving on the staff of the Staff Officer Personnel at Headquarters, North Western Area, RAAF, (located at the 57 mile post on the road from Darwin to Adelaide River) recalled that: 'the partially burnt remains were transported from its crash site to HQ North Western Area for review by Intelligence and others. It was deposited at the HQ, near the Air Staff office, and remained there for over a week, during which time it was under 24 hour guard by unit personnel, (armed with a .303 SMLE [Short Magazine Lee Enfield] rifle and live ammunition), not Service Police. As there were more than enough experienced airmen on the site, each guard would have served only one eight-hour shift. Whilst I was on guard duty on the aircraft remains one night, I found and removed a small metal tag clipped around a cable, no doubt as identification, from inside the fuselage. It was wrapped around what appeared to be electrical cable. I cannot say where in the plane the plate came from, except that I was able to lift a piece of the outer skin of the plane as the remains lay on the ground, and the cable and plate were hanging beneath it. I have kept it since then as a souvenir.'
The serial number appearing on this data plate is thought to equate to this particular bomber's serial number, 5414.