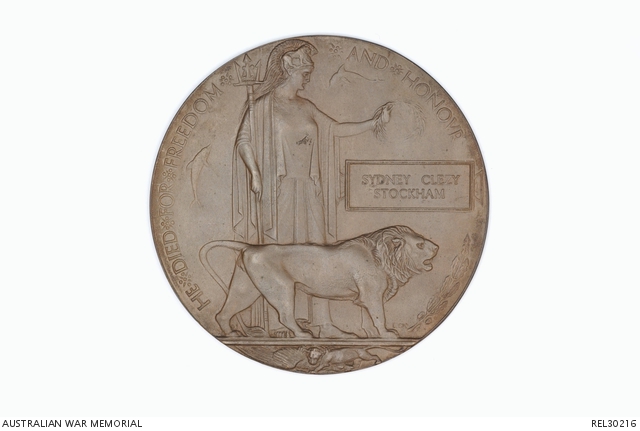 Bronze next of kin plaque, showing on the obverse, Britannia holding a laurel wreath, the British lion, dolphins, a spray of oak leaves and the words 'HE DIED FOR FREEDOM AND HONOUR' around the edge. Beneath the main figures, the British lion defeats the German eagle. The initials 'ECP', for the designer Edward Carter Preston appear above the lion's right forepaw. A raised rectangle above the lion's head bears the name 'SYDNEY CLEZY STOCKHAM'.

Born in Brinkworth, South Australia, Sydney Clezy Stockham was employed as a clerk by George Wills and Co, Adelaide when he enlisted in the AIF on 12 February 1915, aged 25. Posted a private (service number 698) to the 27th Battalion, he had been promoted lance corporal by the time the unit left Adelaide on 31 May, aboard HMAT A2 Geelong.

Stockham landed at Gallipoli with his battalion on 4 September. In Egypt in 1916, he was promoted corporal on 12 February, and then in August to sergeant, after the battalion had moved to France for service on the Western Front. Stockham received a gunshot wound to his right thigh during an action at Malt Trench at Butte de Warlencourt on 2 March 1917. Evacuated for medical treatment he was able to rejoin the battalion three weeks later and shortly afterwards was promoted second lieutenant. He was promoted lieutenant on 14 October.

From the beginning if 1918 Stockham under took training courses and was posted an instructor in both France and England. He returned to 27th Battalion in France on 1 August. On 14 August he was sent as a liaison officer to the 131st United States Infantry Regiment. While attached to the regiment he received a gunshot wound to the abdomen near Mericourt, on 17 August. Taken to the 10th (British) Casualty Clearing Station at Vecquemont the same day he died there the following day. He is buried in the Daours Communal Cemetery Extension.

This commemorative plaque was sent to Stockham's father, George William Stockham, in January 1923. His eldest son, another George William, was also killed in the war, at Bullecourt on 10 May 1917.