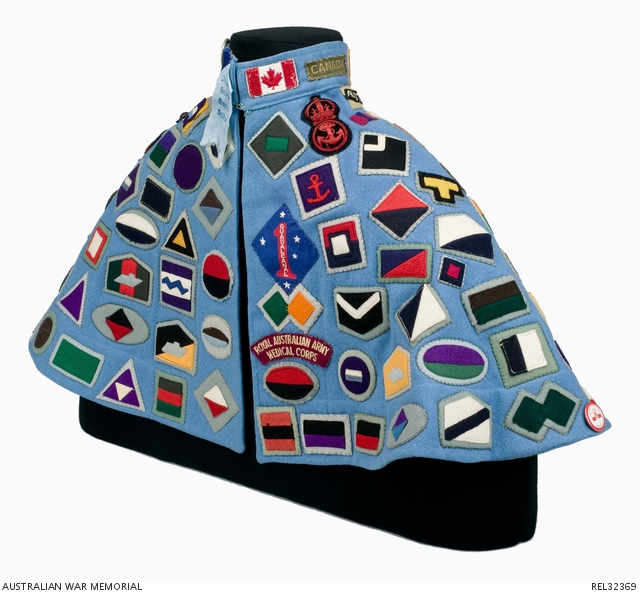 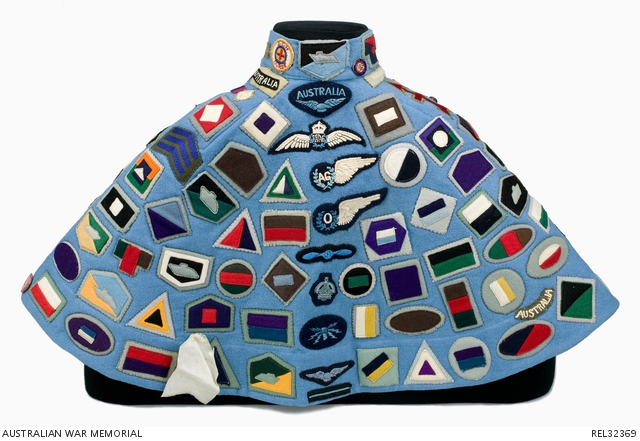 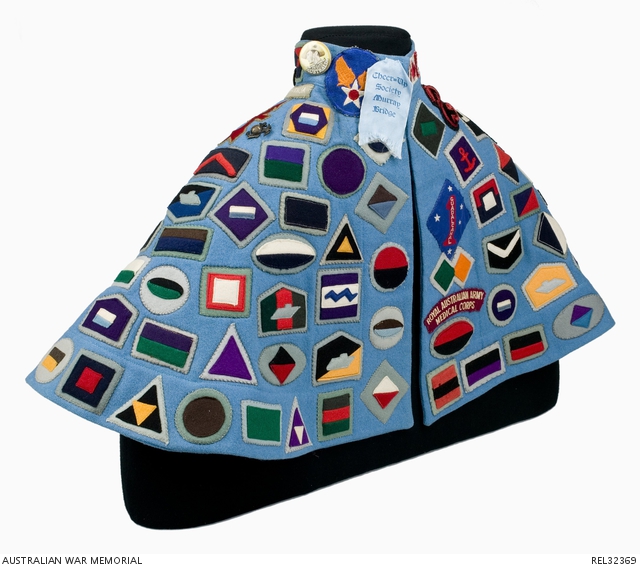 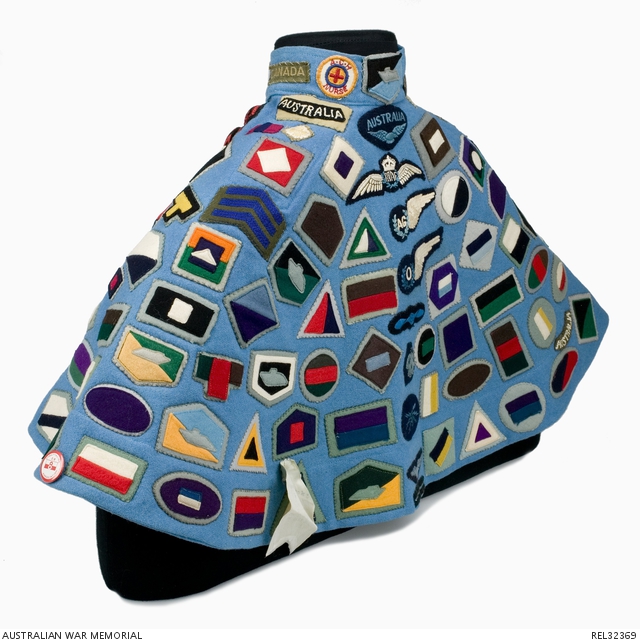 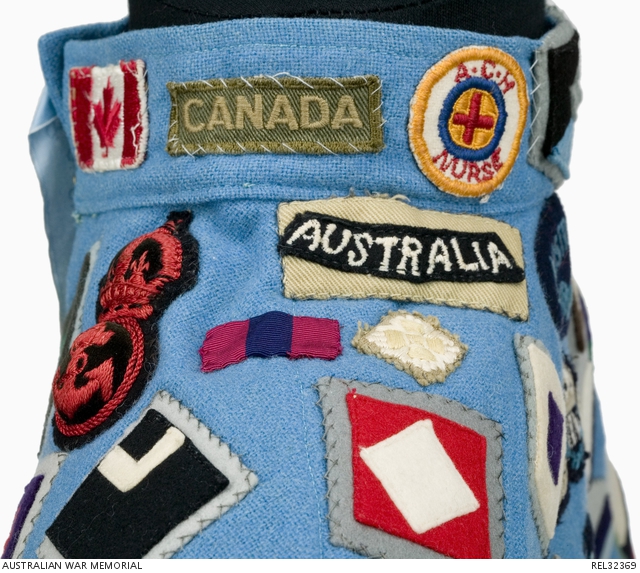 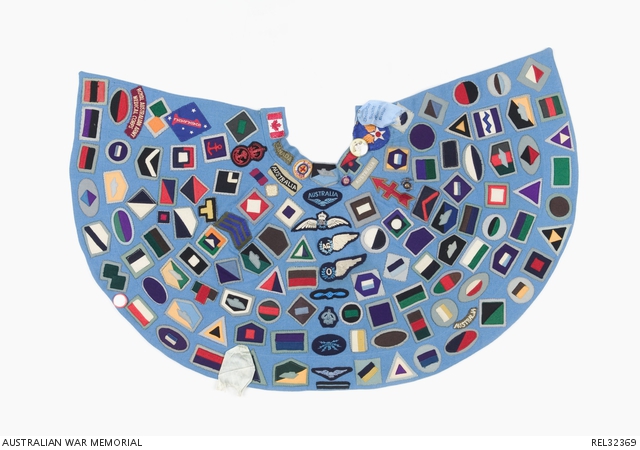 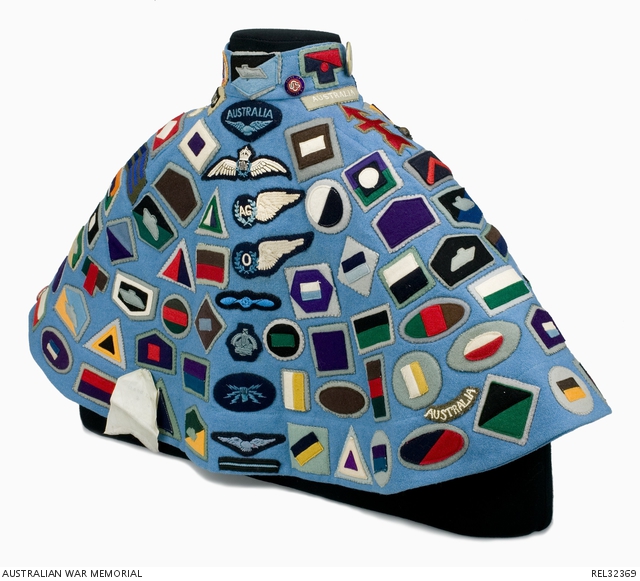 Semi-circular light blue wool flannel shoulder cape with a stand collar worn by Miss Golda Ellis. The collar fastens with two hooks and eyes. Sewn to the inside of the cape, using fine herringbone stitch, are approximately 100 army colour patches for infantry, engineers, commando, signals, medical, artillery, armoured, provost, postal and water transport units. Running down the centre of the cape is a line of RAAF embroidered badges including shoulder titles, rank insignia, pilot's, air gunners and observer's wings.Other badges attached to the cape include a red embroidered RAN petty officer's cap badge, a number of United States and Canadian badges, a US Marines metal collar badge and a red, blue and white enamelled 'CHEER UP SOCIETY S.A.' badge attached to the collar. A ribbon for the Distingished Conduct Medal awarded to Private O Z Neall, of 2/8 Infantry Battalion, who married Miss Ellis in 1943 is also sewn to the cape. Two pale blue ribbons with printed lettering are attached to the cape, one to the collar and one on the hem. The ribbon on the collar reads 'Cheer=Up Society Murray Bridge' and the ribbon on the hem 'Good Luck * * CHEER UP SOCIETY MURRAY BRIDGE'. A few badges, including a 1950s embroidered shoulder title for the Royal Australian Army Medical Corps, have been added after the Second World War and are easily identified by the rough quality of the stitching attaching them to the cape.

Worn by Miss Golda Jean Ellis, a member of the Murray Bridge chapter of the Adelaide Cheer Up Society - also known as Cheer Up Hut Number 2. Golda attached the patches to the inside of her cape after collecting them from servicemen whom she and other Cheer Up Society girls met at the Murray Bridge railway station. They also promoted the activities of the Society - to provide relaxation, meals and social activities to the many thousands of servicement who passed through Adelaide. The Society organised dances, provided books, magazines, musical instruments and meals and devoted their time socialising and talking. Joan Merchant, a fellow Cheer Up Society girl, said 'They told you about their homes, their children, showed you pictures of their wives and their babies. They just wanted someone to talk to a lot of the time.' Because of a legacy of childhood polio, which required her to wear a leg caliper, Golda had not been able to join any of the wartime women's forces, despite mastering horseriding as a teenager, and instead joined the Cheer Up Society, while continuing to live at home with her parents. Golda related that she would meet the troops at the station, bearing an usherette's tray filled with fruit and chocolates. If a soldier was wearing a patch she didn't yet have for her collection on her cape, she deliberately offered him fruit first, as a swap for his patch.

Golda met Sergeant (later lieutenant) Oliver Zachariah "Ozzie" Neall of 2/8 Infantry Battalion after he returned from service in North Africa and Greece, where he had been awarded the Distinguished Conduct Medal (DCM) for gallantry at Tobruk in January 1941. While on leave he called on her parents, who were friends of his parents, and was asked to call Golda to join them at afternoon tea. She recalled that he found her scrubbing the bathroom floor and that 'it was love at first sight'. The couple became engaged but Neall was posted to the Northern Territory. Granted leave unexpectedly he gave Golda just ten days in which to prepare for their wedding, which took place on 23 October 1943. The wedding dress was purchased in Adelaide, while friends and neighbours at Murray Bridge provided flowers from their gardens and helped with the catering. One of the ribbons sewn to the cape is taken from her husband's DCM. Golda Neall died on 16 November 2003 at Adelaide.