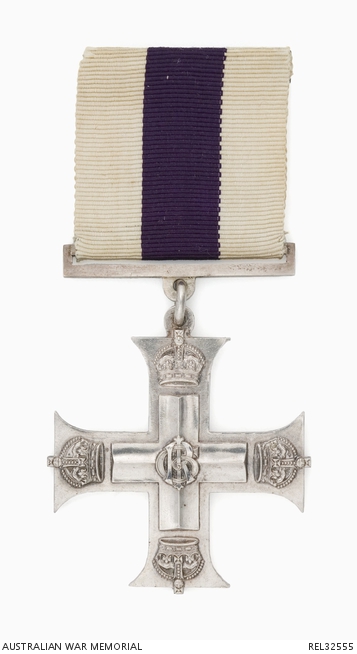 William Henry ‘Billy’ Orchard was born on 9 August 1888 at Geelong, Victoria. He was educated at Geelong Grammar School and was working as an accountant when he enlisted for service in the First World War, aged 26 with the 1st reinforcements of 38 Battalion, AIF, on 26 July 1916. He had recently married Henrietta (nee Galbraith), in 1915.
Billy Orchard was also coach and captain (1914 and 1915) of the Geelong Football Club and a long-time member of the Geelong Cricket Association.

Orchard was made lieutenant in 1 May 1916. The battalion left Australia in the troopship HMAT A54 Runic on 20 June 1916. During training in England in October 1916 he played an Australian Rules exhibition match at the Queen’s Club, London representing the 3rd Division team - they won against the Training Unit Team. After training in England his battalion arrived in France in November 1916. On 4 December 1916, at Armentieres, Orchard was hit on his right temple and thorax by pieces of shrapnel from a Newton Pippin Rifle grenade (also known as a No 22 Rifle Grenade) which prematurely exploded, resulting in a wound on his eyelid and a rapidly deteriorating function of his right eye. He was evacuated to England and didn’t return to his unit until March 1917. Post-war he received a glass replacement for his wounded eye.

The Newton Pippin Rifle Grenade was named after its inventor, British Captain Henry Newton, and was manufactured in France at the Armentieres Workshops. A small percentage of the Mark I versions of these 1915 ‘emergency’ pattern grenades had a tendency to explode in the barrel of the rifle due to the manufacturing process and it is likely that it was a Mark I that wounded Lieutenant Orchard.

In April 1916 Orchard was promoted to captain. He was awarded this Military Cross during the fight to control Broodseinde Ridge early on the morning of 4 October 1917. The citation reads, 'For conspicuous gallantry and devotion to duty. Owing to his officers being killed or wounded early in the fight, he found himself in command of the assaulting troops. He carried out his task and re-organised in a very efficient manner. His energy and cheerfulness in depressing circumstances were an incentive to all.' Orchard subsequently commanded D Company of his Battalion and his report of the operation on 4 October 1917 appears in the Battalion War Diary.

His back luck with weapons continued when, on 8 August 1918, while jumping over a trench, his right leg was impaled just above the ankle by a bayonet. He remained on duty but the wound worsened and on 13 August he was evacuated back to England; he rejoined his battalion two months later, just a month before the war ended. He returned to Australia on 28 February 1919 and resumed his career as an accountant, playing cricket and acting as a field umpire for the VFL. He died in 1965.