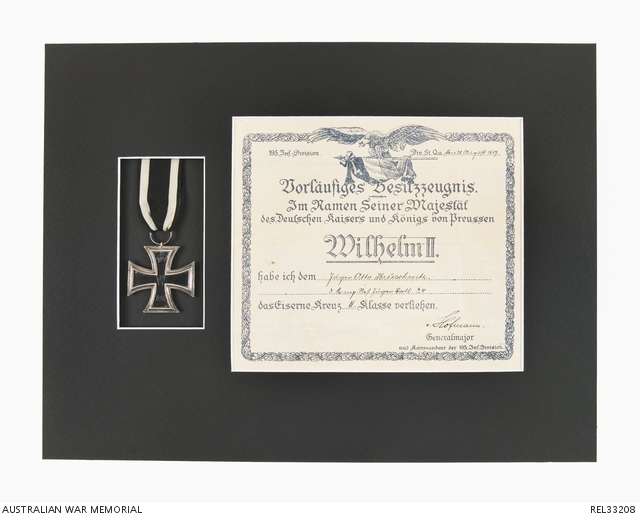 Iron Cross, Second Class, mounted within a glazed frame, accompanied by the original certificate which details the recipient, Jaeger Otto Kruschwitz of the 3rd King's Reserve, 24th Jaeger Regiment, 195th Infantry Division, and the date of the award - 28 August 1917.

Recovered by 4435 Private William Samuel Cropper a clerk of Manly, NSW, who enlisted at the age of 18 on 11 September 1915 and was assigned to the 14th Reinforcements of 1 Battalion. Cropper arrived in France on 28 March 1916. He was transferred to 1 Anzac Wireless Section (later the Australian Corps Signal Company), AIF on 4 October 1916 and served with this Section until the end of the war. Cropper suffered a gunshot wound to his right thigh on 20 March 1918 and spent the next 3 months recovering at Beaufort War Hospital in Bristol, England. He rejoined his unit on 5 July 1918 and spent the remainder of the war in France. He returned to Australia on 28 March 1919. Cropper's father, Samuel Clements Cropper, also served during the First World War with 4 Division Traffic Control. A number of his brothers also served. Cropper senior, who was multi-lingual, insisted that his sons also become proficient in languages other than English, so when William Cropper encountered a dying German, Otto Kruschwitz, of the 24th Jaeger Regiment, 195th Infantry Division, on the battlefield, he was able to to offer him some comfort in German. Kruschwitz gave him his recently awarded Iron Cross and certificate and asked if Cropper could find his family in Germany and return them after the war. Cropper tried to locate Kruschwitz's family on a number of occasions after the war, but to no avail. Two months after Kruschwitz was awarded the Iron Cross, the 195th Infantry Division encountered Australian forces at First Passchendaele (9 & 12 October 1917), where according to the Australian Official History, 'the casualties of the 195th Division were extremely severe' (p 900, vol 4), losing 3,325 officers and men. It is likely that this is when Cropper encountered the dying Kruschwitz.