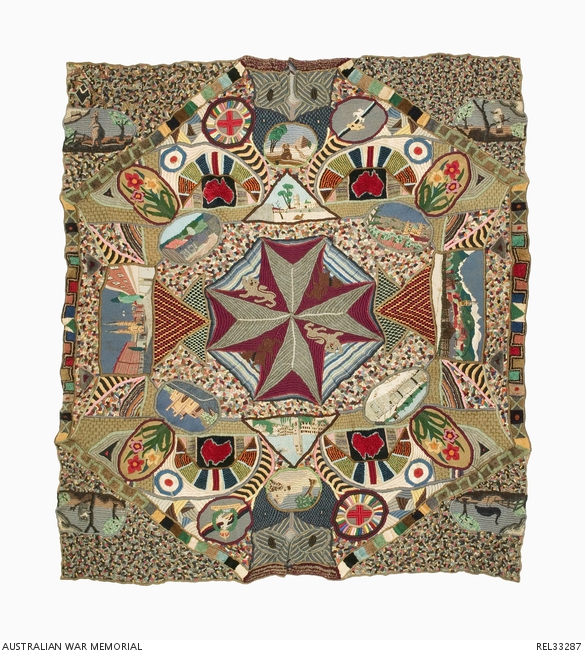 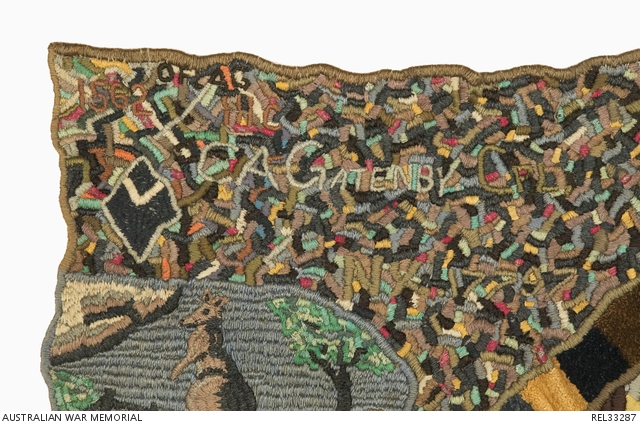 Standard grey wool Army issue blanket completely covered in stem stitch, satin stitch, chain stitch and Turkey work executed in a wide variety of colours and wool plys. The predominant colours are shades of khaki, brown, grey, grey-green and grey-blue. The design of the blanket is symmetrical so that each shape or scene has an opposing image. The patterned infills between the images also have identical opposing sections. In the centre is a large grey Maltese cross with lions and unicorns placed alternately between the arms. The cross fits into an octagon infilled with sections of maroon, and sections of blue, grey and green stripes. To the left and right of the cross are three triangular shapes filled with chequerboard patterns in black, green, red and yellow. Around the edge of the octagon are two scenes from North Africa within brown triangles; four landscape scenes within ovals showing a mosque and three images of the maker's prisoner of war camp and its surrounds in different seasons; and four evenly spaced red Turkey work maps of the Australian mainland. The outermost row of images shows a group of three flowers in each corner within an oval; four RAF/RAAF roundels; an Egyptian scene and a scene with the Sphinx and pyramids, each within a circle; two large scenes within rectangles showing Stalag 383 at Hohenfels by night and by day, with the daytime image showing the perimeter fence of the camp; two circles with multi-coloured 'rays emanating from a red cross; and the embroidered badges of the Royal Army Veterinary Corps and the Royal Corps of Signals, each within a circle. A band of Turkey work squares and rectangles runs across each corner of the blanket forming a triangle. Each triangle bears an Australian animal or bird within an oval. They are, clockwise from the top left corner, a kangaroo, a kookaburra, an emu and a koala. The top left corner also bears a small black and white representation of the colour patch for 7 Division Provost Company and '1562 OFLAG IIIC C A GATENBY CPL NX17797' in grey, brown and khaki satin stitch. The centre of each end of the blanket bears a stylised owl's head.

This standard army blanket was issued to Corporal Clifford Alexander Gatenby, of 7 Division Provost Company, when he enlisted for service in Sydney in May 1940. Gatenby served in North Africa and took part in the ill-fated campaign in Greece and Crete in 1941. On Crete, in late May or the beginning of June, while supervising the evacuation of troops, he became so tired after nearly 48 hours of continuous work, that he sat down behind a rock to rest, fell asleep, and woke to find himself surrounded by Germans.

Gatenby was first sent to Stalag XVIII D in Marburg, Austria before being sent to Stalag XVIII B in Spittal, Austria. In September 1942 he was transferred to Oflag III C in Hohenfels, Germany where he was imprisoned for the remainder of the war. He began the embroidery on his blanket soon after his arrival, initially placing his name, service number, unit's colour patch and unit on the blanket so that it could be immediately identified as his, later adding a kangaroo.

Also included with his name is a number that is thought to be the initial prisoner identification number allocated to him by the Germans and the name of his camp 'Oflag III C (3C)'. Oflags were POW camps for officers and this particular camp was initially located at Hohenfels in Bavaria. It was soon relocated to Brandenburg, still as an officer's camp, while the Hohenfels site was converted to a Stalag, or camp for non-commissioned officers and soldiers, and given the number 383. Stalag 383 eventually housed about 8,000 prisoners, the majority of whom were British. Gatenby remained at Hohenfels. He did not retain his original POW number and was assigned a new number, 1562.

He worked the designs on his blanket from the outside in, only finishing the embroidery in 1945, shortly before his release. Gatenby included in the blanket's design scenes illustrating his service history. He embroidered imagery of the Gateway to India in what was then known as Bombay, historic sites such as the pyramids and sphinx at Giza, Rachel's tomb in Egypt, YMCA building in Jerusalem Palestine and scenes from North Africa and Greece.

Gatenby also embroidered imagery to represent his experience as a prisoner of war, including scenes from Marburg, Spittal and Hohenfels. At the centre of the blanket is a St John's cross superimposed over a red cross. St John's Ambulance worked side by side with the Red Cross to package parcels which were crucial to prisoners of war and it is thought this was inspiration for this motif. Gatenby used the darning needle from his Army issue sewing kit, which he frequently sharpened, a hand made crochet hook for the Turkey work, and wool unravelled from worn out socks, jumpers and scarves, either belonging to other prisoners or from items sent in Red Cross parcels. Gatenby traded cigarettes from his Red Cross parcels to obtain different brightly coloured wools from fellow prisoners, especially the British, whose families were sometimes able to send them clothing through Red Cross channels. He also corresponded with an aunt in England who sent him knitted items containing coloured wool especially for his embroidery. She may also have sent him the commercially produced pattern for the flowers that appear on the blanket. The RAAF/RAF roundels represent Gatenby's younger brother, Flight Lieutenant Gordon Gatenby, an RAAF fighter pilot serving with 456 Squadron RAF. After his release and return to Australia Gatenby was discharged from the army on 11 August 1945.