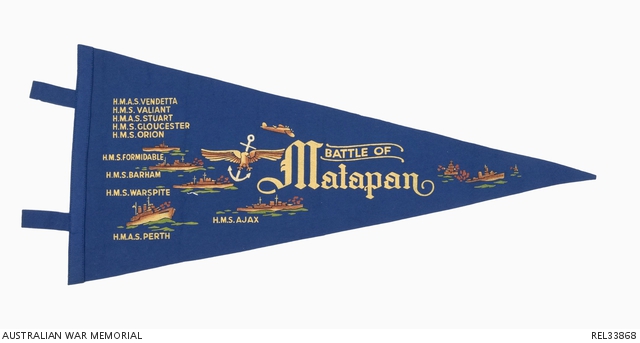 Blue felt souvenir pennant commemorating the Battle of Matapan, a sea battle which took place off Cape Matapan in southern Greece on 27-28 March 1941 between British, Australian and Italian forces, resulting in the loss of three Italian cruisers and two Italian destroyers. Printed on either side of the legend 'BATTLE OF Matapan' are a list of ships - HMAS VENDETTA / HMS VALIANT / HMAS STUART / HMS GLOUCESTER / HMS ORION' over a series of simple pictorial depictions of HMS FORMIDABLE; HMS BARHAM ; HMS WARSPITE; HMAS PERTH; HMS AJAX; and a Combined Fleet symbol of an eagle over an anchor. A plane and sinking ships (presumably Italian) are also depicted. The colours are yellow, red green and brown.

Associated with the service of VX38285 Lance Corporal Thomas Henry Clissold, 2/2 Field Company, Royal Australian Engineers (RAE). Born on 29 January 1919 at Hawkesdale, Victoria, and employed as a plumber and foreman contractor, Clissold enlisted at Melbourne Town Hall, Victoria on 24 July 1940. He embarked for service in the Middle East on 10 April 1941, arriving on 14 May and saw service there until returning to Australia on 28 March 1942. After over two year's service and training in Darwin, NSW, South Australia and Queensland (during which he was awarded the Australian Efficiency Medal on 19 July 1944) he sailed with his unit from Cairns on 28 October 1944, bound for Aitape, New Guinea. Clissold did not manage to return to Australia until late January 1946. Although due for discharge, he was transferred to 2/1 Field Company in March 1946 and then to 7 CRE Works (Commander Royal Engineers Works) and worked at Murchison POW Camp, Tatura, Victoria until August. He was finally discharged on 8 January 1947. Clissold displayed a high degree of expertise with designing and casting souvenirs made from aluminium and Perspex, materials freely available as salvage from wrecked aircraft in the New Guinea theatre. Souvenirs such as these were either sent home as sweetheart gifts, or sold to other servicemen and Americans for profit.