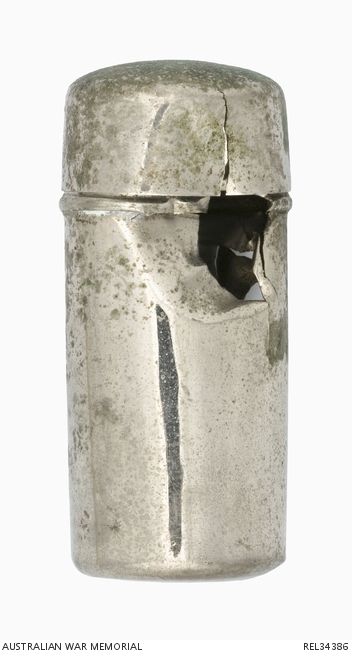 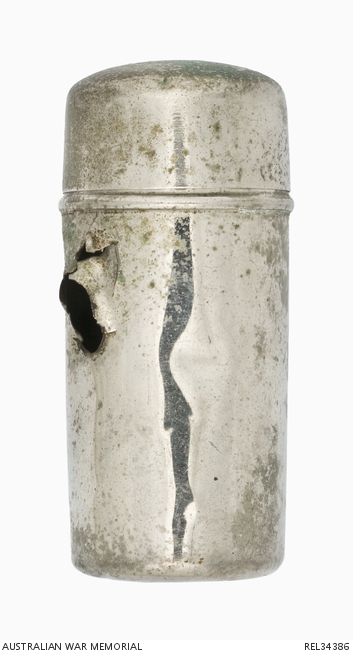 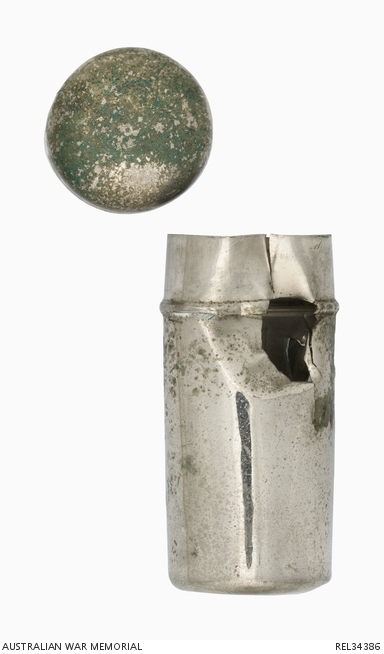 Damaged shaving soap container related to the service of 4796 Private David Temple Palmerston Wilson of Geelong, a Victorian Railways fireman who enlisted on 9 February 1916 aged 26. Wilson embarked from Melbourne for overseas service on 4 April 1916 aboard HMAT Euripides as part of the 9 to 12th Reinforcements for 24 Battalion. After training in England, Private Wilson proceeded to France on 22 September, joining his battalion in Belgium on 2 October where they were recovering from their recent participation in the Pozieres and Mouquet Farm assaults and rebuilding the battalion.

On 20 November, after six weeks of alternating between the front and labouring tasks, he was hospitalised for over a month with trench foot, before rejoining his unit on Christmas Day. Wilson was promoted to Lance Corporal on 15 April 1917, not long before 24 Battalion participated in the second battle of Bullecourt on 3 May where, in the space of less than 24 hours, they suffered 80 per cent casualties. Lance Corporal Wilson escaped this fate, only to be wounded, probably by machine gun fire, at Broodseinde Ridge on 8 October 1917, suffering extensive multiple wounds to his right thigh and buttock. In later correspondence with Army Records, he disputed their facts, stating 'the first time I was wounded 8/10/17, your report says I was discharged from hospital on 9/1/18. I might say that I was a cripple in Convalescent Camp till 18/4/18'; Wilson recovered in England.

Wilson rejoined his depleted unit on 31 May 1918, participating in the assault on Hamel, the August offensive and the assault and capture of Mont St Quentin on 1 September, where he was again wounded. The bullet passed through his right chest just under the shoulder and continued through his pack and through a metal container that normally held shaving soap but at the time contained a few coins that he had collected. After hospital treatment and a partial recovery Wilson returned to Australia aboard the hospital ship Argyllshire and was discharged as medically unfit on 11 March 1919.