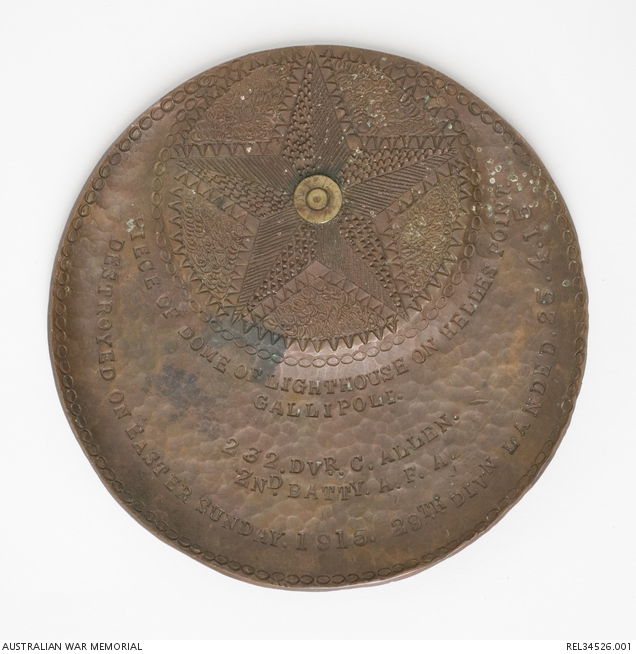 Circular ashtray made from hammered copper, showing the Ottoman crescent moon and star. The star is elaborately impressed on a raised circular area within the curve of the crescent moon. The star has a hole in its centre into which the bottom of a Turkish cartridge has been set. The cresent moon is bowl shaped to contain the ash. The edge of the moon is impressed with small circles, creating a border. The edges of the crescent are punch stamped 'PIECE OF DOME OF LIGHTHOUSE ON HELLES POINT / GALLIPOLI. / DESTROYED ON EASTER SUNDAY. 1915. 29TH. DIVN LANDED. 25.4.15'. In the centre of the crescent is stamped '232.DVR. C. ALLEN / 2ND. BATTY. A.F.A. '.

232 Driver Charles Allen enlisted in the AIF on 24 August 1914. He was 20 year old and working as a plumber,and had previously served two years with the 14th Battery Australian Field Artillery. After training in Australia he embarked from Sydney on 18 October 1914 aboard HMAT Argyllshire with the 2nd Battery of the 1st Field Artillery Brigade. Allen served at Cape Helles on Gallipoli from 4 May 1915 until 11 May when he was evacuated to hospital in Alexandria in Egypt with a fever. He later returned to Helles, where he remained until early December 1915 when he was sent back to Egypt with his unit.

On 21 March he embarked from Egypt for France, arriving at Marseilles on 27 March. Allen continued to serve with 2 Battery until he was killed near Flers on 12 November 1916. He was initially buried 137 metres south east of Factory Avenue, about 800 metres west of Flers. In the 1920s his body was reinterred in the AIF Burial Ground Grass Lane, Flers.

This personalised ashtray was made at Helles and purchased by Allen while serving there. A cottage industry of trench art ashtrays made from the copper of the Helles lighthouse dome appears to have been established by a member, or members of the 29th (British) Division, with a number of ashtrays with similar inscriptions being produced. This ashtray includes the bottom of a Turkish cartridge, with the headstamp dating the cartridge to 1326 (Islamic calendar), which is about 1908 in the Western calendar. The buyers of the ashtrays were able to have them personalised, for a small additional fee, by the addition of their name and unit details.