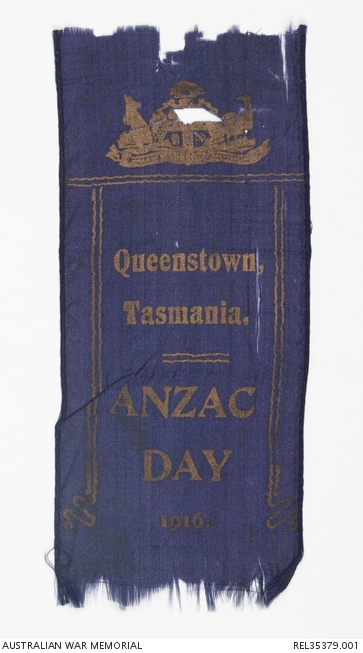 Patriotic silk bookmark for Anzac Day 1916. The bookmark is blue in colour with gold printed script and detail. It features the Australian coat of arms at the top of the bookmark, with the words 'Queenstown, Tasmania. ANZAC DAY 1916' contained within a three-sided border which unfurls at the bottom.

This item was most likely purchased by the mother of 490 Private Samuel James Smith who served with 12 Battalion at Gallipoli. He was born at Avoca, Tasmania and worked as a labourer prior to his enlistment in August 1914 at the age of 21 years. He was wounded at Gallipoli in May with gunshot wounds to the arm and thigh. After the Gallipoli campaign, Smith transferred to 52 Battalion and embarked with the British Expeditionary Force in June 1916 from Alexandria, Egypt for Marseilles, France to serve on the Western Front. He was promoted to lance corporal in September 1916, then corporal in March 1917. Smith was again wounded with gunshot wounds to the foot and leg, and as a result of these wounds, returned to Australia in March 1918 and was discharged from service in December that year. This bookmark would have been sold to help raise funds for the war effort, or soldiers' charities.