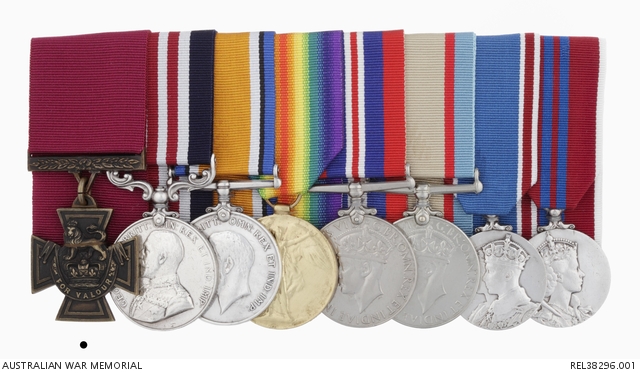 George Mawby (Morby) Ingram was born on 18 March 1899 in Bendigo, Victoria. Ingram was a carpenter before joining the Australian Naval and Military Expeditionary Force for service in New Guinea, then enlisting in the AIF. He arrived in France in early 1917 where he was awarded the Military Medal for his conduct near Bapaume two months later.

Despite illnesses which hospitalised him several times, he was with his battalion when it took part in the last Australian infantry action of the war, the attack on Montbrehain on 5 October 1918. When the battalion came under heavy fire, Ingram rushed an enemy post and captured nine machine-guns, killing 42 of the enemy in the process. Several more times throughout the day he displayed great courage, capturing posts and many more prisoners. The recommendation for the award reads:

'During the attack on MONTBREHAIN, East of PERONNE, on 5th October 1918, this officer was in charge of a Platoon.
About 100 Yards from the jumping-off Trench severe enemy machine-gun fire was encountered from a Strong Post which had escaped our Artillery fire, and the advance was thus held up. Lieut. INGRAM dashed out, and, under cover of the fire of a Lewis gun, rushed the post at the head of his men. This post contained 9 Machine Guns and 42 Germans who fought until our men were within 3 Yards of them. They were killed to a man – Lieut. INGRAM accounting for no less than 18 of them.

A number of enemy posts were then observed to be firing on our men about 150 Yards further forward and the Company moved forward to attack them, but severe casualties were sustained. The Company Commander had been badly wounded, and the Company Sergeant Major and several others, who attempted to lead the advance, were killed.

Our barrage had passed on and no tanks were near. Lieut. INGRAM quickly seized the situation, rallied his men in the face of murderous fire, and, with magnificent courage and resolution, led them forward. He himself rushed the first post, shot 6 of the enemy, and captured a Machine Gun, thus overcoming a very serious resistance.

By this time the Company had been reduced from 90 to about 30 Other Ranks, but this Officer, seeing enemy fire coming from a Quarry, to his left front, again led his men forward and rushed the Quarry.

He jumped into the Quarry amongst enemy wire, and his men followed and proceeded to mop up a large number of the enemy who were in bivouacs there.

He then observed an enemy Machine Gun firing from the ventilator of a cellar, through a gap in the wall of the house about 20 yards away. Without hesitation and entirely alone, he scrambled up the edge of the Quarry, ran around the rear of the house, and, entering from the far side, shot the enemy gunner through the ventilator of the cellar. He fired several more shots into the cellar, then, seeing some enemy jumping out of the window of the house, he burst open a door, rushed to the head of the stairs leading into the cellar, and forced 62 of the enemy to surrender.

He now found he was out of touch with the Company on his left flank, so went out alone and made a personal reconnaissance under heavy fire, and succeeded in gaining touch with the Left Company which had lost all its Officers.

Having returned to his Company he personally placed a Post on his left flank to ensure its safety and then reconnoitered and established 2 Posts on his right flank. All this was done in the face of continuous machine-gun and shell fire.

Throughout the whole day he showed the most splendid qualities of courage and leadership and freely exposed himself again and again with utter contempt of danger.

By his example he encouraged his men to keep up such a constant fire on the enemy, who were reinforcing in large numbers, that not only did he levy a large toll of casualties upon them, but was responsible for destroying counter-attacks on his front.
He personally inflicted 40 casualties on the enemy exclusive of the large number of prisoners he captured.’

After the war Ingram worked as a building foreman and a farmer in Victoria. During the Second World War he served with the Royal Australian Engineers, attaining the rank of captain.

Ingram’s Victoria Cross is accompanied by the Military Medal, service medals for the First and Second World Wars, and coronation medals for King George VI and Queen Elizabeth II.