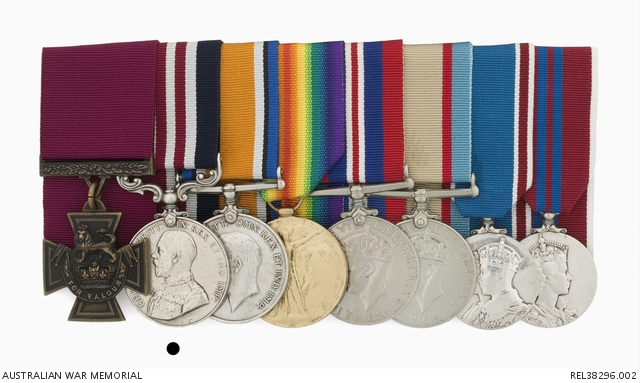 George Mawby (Morby) Ingram was born on 18 March 1899 in Bendigo, Victoria. Ingram was a carpenter before joining the Australian Naval and Military Expeditionary Force for service in New Guinea, then enlisting in the AIF with 24 Battalion as private 5919. He arrived in France in early 1917 where he was awarded the Military Medal for his conduct near Bapaume in March.
In the fighting, the then Lance Corporal Ingram was a member of the bombing section of the battalion. With his section, he held off a greater force of enemy bomb throwers and later covered the forced retirement of his party following a German counter-attack.
The recommendation for the award reads:
'During an attack on the enemy position on BAPAUME RIDGE on the night of 15th 16th March this N.C.O. showed great courage and initiative as member of a bombing section.
It was mainly owing to the excellent placing of his bombs, that the enemy bombers, who greatly outnumbered our mens [sic], were held off. Later when the enemy returned in force this N.C.O. with 2 men covered the retirement of his party, and by deadly sniping held the attackers off thereby averting serious loss to our bombing party.'

Later, despite illnesses which hospitalised him several times, he was with his battalion when it took part in the last Australian infantry action of the war, the attack on Montbrehain on 5 October 1918. When the battalion came under heavy fire, Ingram rushed an enemy post and captured nine machine-guns, killing 42 of the enemy in the process. Several more times throughout the day he displayed great courage, capturing posts and many more prisoners. For his conduct at Montbrehain, he was awarded the Victoria Cross.
After the war Ingram worked as a building foreman and a farmer in Victoria. During the Second World War he served with the Royal Australian Engineers, attaining the rank of captain.
Ingram’s Military Medal is preceded by the Victoria Cross and is accompanied by service medals for the First and Second World Wars, and coronation medals for King George VI and Queen Elizabeth II.