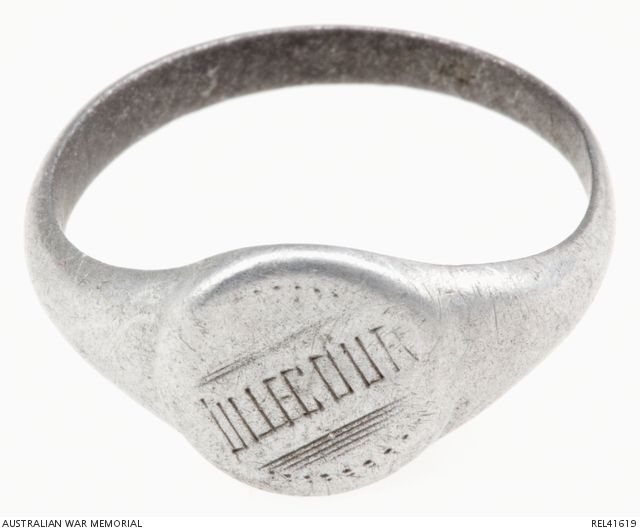 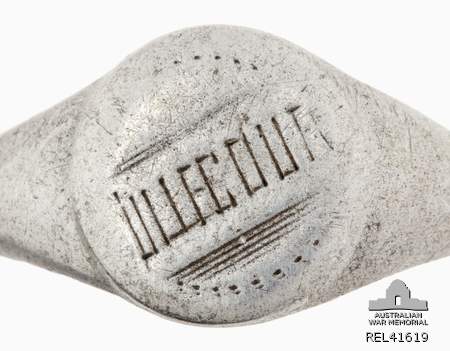 Small aluminium finger ring with a circular face. The face has been engraved diagonally across the front with the word, 'BULLLECOURT' with a decorative pattern above and below.

It is understood that this ring was made from a piece of aircraft by Sergeant C S Barnes, 56th Battalion, AIF.

Born in the Sydney suburb of Redfern in 1894, Charles Sydney Barnes was working as a shop assistant and serving in the Militia when he enlisted in the AIF in July 1915. Barnes embarked aboard A14 HMAT Euripides on 2 November 1915 with the 6th Reinforcements to the 20th Battalion. Transferred to the 56th Battalion in February 1916, Barnes saw service with this unit on the Western Front. For a short time, in September 1917, he was detached for duty with the 1st Australian Tunnelling Company.

Barnes was promoted to Temporary Sergeant in October 1917, and in early 1918 was transferred to the 14th Training Battalion at Codford, Wiltshire, England. He returning to the 56th Battalion in August 1918, and was wounded in the left thigh during the fighting for Peronne on 2 September. Invalided to England, Barnes returned to Australia aboard HMAT Ascanius in February 1919.

Barnes' younger brother, Roy Leslie Barnes enlisted in the AIF in April 1916, aged 18. 2620 Private R L Barnes served with the 53rd Battalion and was wounded at Bullecourt in May 1917. Rejoining the 53rd Battalion, Barnes was again wounded (this time accidentally) in September 1917. He appears to have then contracted tuberculosis and returned to Australia aboard A14 HMAT Euripides in March 1919. Roy Barnes died in 1921.