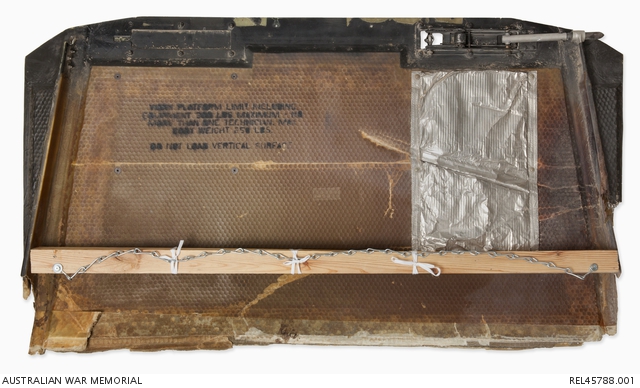 Epoxy graphite composite engine cowling used as an emergency stretcher in the evacuation of casualties off a UH-60 Black Hawk helicopter which crashed on 21 June 2010 in Northern Kandahar, Afghanistan.
The edges of the cowling are damaged while the bottom edge of the cover is missing and shows evidence of forced removal or crash damage. The spring loaded securing bolt assembly for use on the aircraft is still in-situ on the panel's rear top left but the corresponding adjacent bolt is missing. Single raised strengthening ribs run at an angle up either end of the panel. Stencilled on the reverse right hand side of the panel is 'WORK PLATFORM LIMIT INCLUDING EQUIPMENT 300 LBS MAXIMUM - NO MORE THAN ONE TECHNICIAN. MAX BODY WEIGHT 250 LBS. / DO NOT LOAD VERTICAL SURFACE.' A timber hanging brace with chain is attached to the rear.
On the central front of the panel is a red, white and black circular motif representing the rising sun with the silhouettes of two medical helicopters and the NATO emblem surmounting the silhouette of a mountain range with an outline map of Afghanistan with a red star showing the location of the crashed helicopter. Surrounding the edge of the motif in red letters is 'KAF ROLE 3 MMU TRAUMA BAY IN MEMORY OF JUNE 21ST, 2010'. On the right hand side of the motif is an outlined silhouette of boots holding a downturned rifle and helmet. The left hand side of the panel shows an outlined silhouette of a soldier carrying a wounded comrade.

In the early hours of 21 June, four US Army UH-60 Black Hawk helicopters of Task Force 'No Mercy' were transporting Coalition personnel into the Shah Wali Kot region of Kandahar Province. During the approach to the final check point the first helicopter of the four (carrying ten Australian soldiers and a number of US Army personnel) crashed at high speed into a slight embankment in open desert terrain at 3.39am. The impact caused the helicopter to roll and the fuselage to catch fire. The three remaining Black Hawks responded immediately, some of these landing close to the crash site to provide initial medical assistance and a security cordon around the area.

The crash claimed the lives of three Australian soldiers. 8251206 Private Timothy James Aplin and 8230813 Private Scott Travis Palmer were killed instantly, while 8491591 Private Benjamin Adam Chuck was pronounced dead from his wounds shortly after arriving at the NATO Role 3 Multinational Medical Facility in Kandahar. One of the US Army crewmen on the aircraft, 25 year old Staff Sergeant Brandon M. Silk was also killed. All three Australian soldiers killed were from the Sydney based 2nd Commando Regiment.

Another seven Australian Commandos and several US Army aircrew on-board the helicopter were injured in the crash, some very seriously. Those seriously wounded were evacuated by aeromedical flights to Landstuhl Regional Medical Centre in Germany for immediate treatment.

This engine cowling was used as an improvised emergency stretcher by members of the 2nd Commando Regiment in the evacuation of casualties off the crashed and burning helicopter. It subsequently became a highly significant commemorative item and was respectfully hung in the Trauma Department of the NATO Role 3 Multinational Medical Unit, Kandahar.

On 14 October 2011, Vice Chief of the Defence Force, Air Marshal Mark Binskin AO, released the Australian Inquiry Officer's report into the deaths of the three Australians. The report accepted a United States investigation that found the primary cause of the helicopter crash was a lack of aircrew coordination during the approach to the designated landing zone. The crew lost situational awareness of their rate of descent and impacted the ground with little or no prior warning.

In June 2013 one of the surviving pilots of this UH-60L Black Hawk helicopter, former Chief Warrant Officer Third Class Trevor Baucom, visited the Australian War Memorial with several members of the 2nd Commando Regiment who were involved with the incident. Baucom had been severely wounded in the crash and lost the use of his legs. He was in Australia as a special guest of the 2nd Commando Regiment for the opening of the Afghanistan Avenue of Honour at Yungaburra, Queensland in June/July 2013.

He was shown the relic and he was able to positively identify the cowling as coming from the 'number one' engine mounted on the upper left hand side of his aircraft, serial number 92-26448. During his time at the Memorial Mr Baucom graciously also provided an oral history interview of his experiences serving alongside the Australian Defence Force in combat operations in Afghanistan.