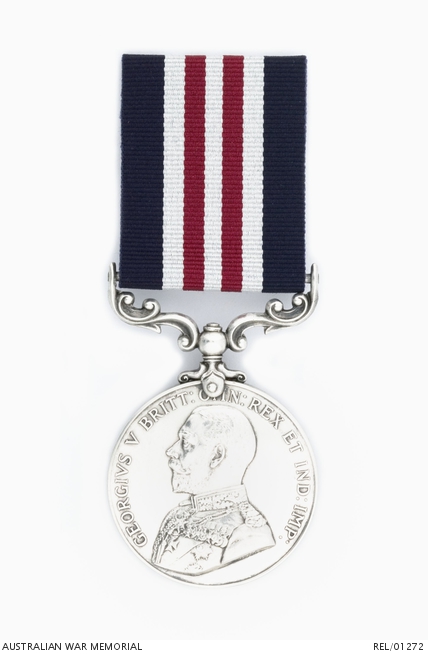 On 6 June 1916, he sailed with his battalion, aboard the Iverniai, to France for service on the Western Front. On 18 August Kennedy was promoted to lance corporal. In its first action in France, at Mouquet Farm on 3 September, fifty per cent of the men in 52 Battalion became casualties. Kennedy was one of them, receiving gunshot wounds to the shoulder, chest and left thigh, and fractured toes. Shortly before he was wounded he took part in an action in which a German machine gun crew were killed, for which he was subsequently awarded the Military Medal. The recommendation for the award reads : 'Mouquet Farm. On the morning of the 3rd September under Sergeant Fiest did excellent work by bombing German grenadiers who were supporting their Machine Gun. Then helped to bomb remainder of German machine gun crew, thus enabling us to work to right and eventually join up with 49th Battalion. They did good work observing during the night of the 3rd', (joint recommendation with 2861 Lance Corporal Ernest Wicks).

Kennedy was evacuated to a casualty clearing station on 5 September and then on to 18 (British) General Hospital at Camiers. There, his condition fluctuated, improving by 2 October, dangerously ill two weeks later, and then improving on 24 October. It is unclear form his records whether one or both of his legs was amputated, but an amputation took place on 16 November. A decision was made to try to transfer him to England by easy stages and he was moved about 4 miles to the St John's Brigade Hospital near Etaples at the end of November. However, infection set in and he died there of septicemia at 12.15 a.m. on 2 December.

This medal was sent to Kennedy's eldest sister in 1922, who, together with her father, had raised her four siblings after her mother's death in 1901. Although the medal would normally have been sent to Kennedy's closest male relative (his father died in 1918), his younger brothers asked that medals and next of kin plaque be forwarded to their sister in recognition of the role she played in keeping the family together, and the authorities complied with their request.