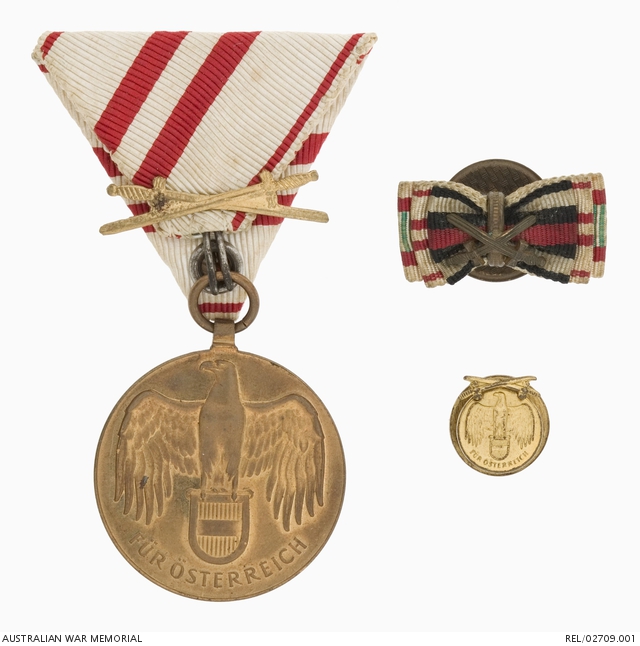 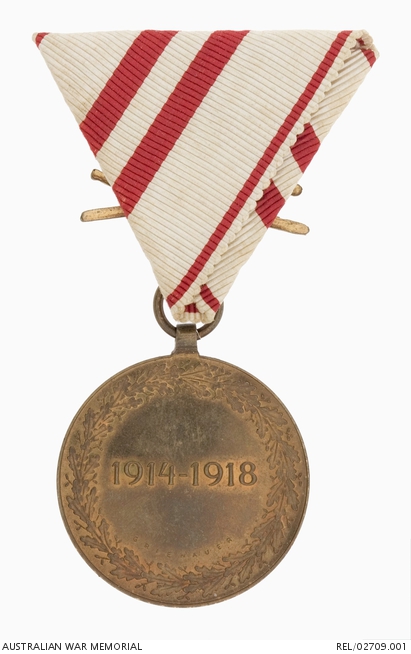 Austrian War Commemorative Medal (1914-1918) with crossed swords device. The obverse of the medal shows an eagle in raised detail, with it's wings open and outer feathers pointing downwards. The eagle is standing on a shield which bears the arms of Austria. Beneath this in raised lettering is written 'FUR OSTERREICH' which translates as 'FOR AUSTRIA'. The ribbon is white with a 1 mm red stripe on each edge and two 4 mm red stripes centrally located. At the base of the ribbon is a gilded metal attachment showing two crossed swords to denote the wearer as a combat veteran. The ribbon bar is made up of three medal ribbons with a brass loop over the middle which is attached to a brass baking button. On the front of the brass loop has been attached a pair of crossed swords. The rearmost ribbon is that of the Hungarian World War Commemorative Medal with Helmet and Swords, for combat veterans. The middle ribbon is the Austrian War Commemorative Medal 1914-1918. The uppermost medal ribbon is the German Cross of Honour for the Great War 1914-18. The bronze swords represent the combat device for both the Austrian and Hungarian medals. The obverse of the lapel badge is the same as that of the Austrian War Commemorative Medal 1914-1918. Crossed swords have been soldered to the top edge of the badge to denote combat service. The badge has been soldered onto a brass backing to form a button. Stamped into the reverse of the button is 'MUNZAMT WIEN' which translates to 'MADE IN VIENNA'.

Ludwig Marx was born on 19 January 1892 at Krefeld, near Dusseldorf in Germany. As a young man, he worked in his father's real estate business in the Rhineland. When the First World War began, Marx enlisted into the Imperial German Army as a private. He initially fought on the Eastern Front where he was wounded when a trench collapsed on him during a bombardment and was sent back to Germany to recover. Marx was then sent to the Western Front where he served until being invalided from the Army in 1918. During his service, he had refused all promotions to remain close to his comrades. In the post war period, Marx refused a war pension, donating it instead to other veterans who were in need. After returning to Germany, Marx returned to his family's real estate business in the Rhineland. He studied economics, marketing and valuation and became a member of the Real Estate Institute. During this period he also became a consultant to the Cologne City Council. Marx was involved with the Rhineland Returned Services Association in Cologne and rose to become the association's President. During his tenure in this position, he arranged for and oversaw the erection of the city's War Memorial. Away from his work and public life, Marx was married and over the ensuing years, three children were born. In 1933, Adolf Hitler and the Nazis came to power in Germany, an event that was to change Marx's life. He joined a small group of people in Cologne who were opposed to the new government. Members of this group became part of a wider network in Germany and abroad who were opposed to Hitler's regime. Marx travelled to England in 1936 on behalf of his group, to warn the British Government about the developing situation in Germany. He was ignored and returned to Germany. Marx was arrested by the Gestapo in 1938 for his outspoken political and religious views. Initially, he was held in jail at Brauweiler after which he was transferred to Dachau and given the prisoner number 27219. He was released early in 1939 after pressure from his colleagues in Cologne was brought to bear on the Government. Upon his release, Marx was forced to sign over all his assets to the state and leave Germany. He left Germany on 10 May 1939 with his wife and children and travelled to Holland. The family boarded the Dutch liner 'Christiaan Huygens' bound for Batavia in the Netherland East Indies. Here they changed ships and travelled in the Dutch liner 'Nieuw Zeeland' to Sydney. Marx and his family disembarked in Sydney on 7 July 1939. As the Second World War began, the Marx family was settling in Sydney. Ludwig Marx initially found work in a leather tanning factory and then in a propeller factory. He was approached at this time by a member of Sydney's Criminal Investigations Branch (CIB) and offered a role of interrogating prospective German internees. The Police Officer, also of German birth had first met Marx when he had worked as a furniture salesman and had remembered him. Marx agreed to assist the CIB voluntarily and his employer gave him the time off when he was required by the police. Marx designed a simple test for those Germans claiming they had been interned in a concentration camp. He would ask the interviewees if they could draw the latrine block of their camp, those that could not were sent to the internment camp at Hay. After the war, Marx set up and ran Ludmar Pty. Ltd. in Sydney, returning to his passion for the real estate business. Ludwig Marx died at the age of 67 on 13 October 1959.