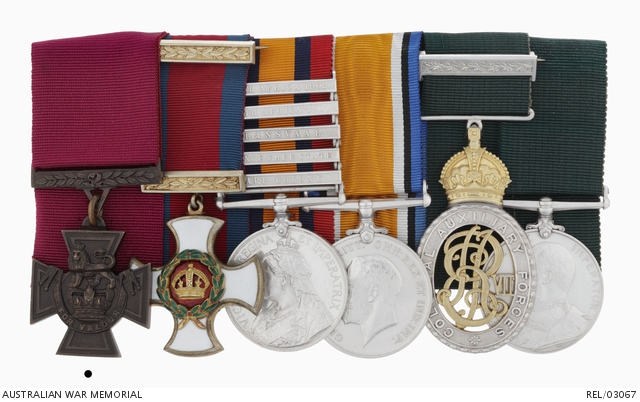 Edgar Leslie Cecil Willis Walker Maygar was born on his parents' property near Kilmore, Victoria on 27 May 1868. The seventh son of Edwin Willis and Helen (nee Grimshaw) Maygar, he was educated at Alexandra and Kilmore public schools. Later, he bought Strathearn Station, near Longwood, Euroa, in partnership with his father and brothers. A skilled horseman, he joined the Victorian Mounted Rifles as a volunteer in March 1891.

With the outbreak of war in South Africa in 1899, Magyar was keen to enlist. He was initially rejected for service due to dental problems, before being accepted by the 5th Contingent of the Victorian Mounted Rifles (5VMR). On 22 January 1901 Maygar was given the temporary rank of lieutenant for the period of his service. Embarking in Melbourne on 15 February 1901 the contingent reached South Africa the following month. The unit, part of the column under the command of British Major General Stuart Beatson, was soon involved in drives which were designed to deprive the roving bands of Boer guerrillas of support.

In June 5VMR suffered an embarrassing defeat at the hands of the Boers at Wilmansrust. The ensuing reprimand by Beatson regarding the conduct of the Victorians, and the findings of a subsequent inquiry is still contentious. Following the incident the formerly good relations between the Australians and Beatson soured, and in August the Victorians were transferred to Natal under the command of Colonel William Pulteney.

Pulteney's column was charged with preventing the Boer General Louis Botha from bringing the war into Natal. On 23 November near Geelhoutboom, 5VMR came across a large group of Boers making off with a substantial herd of livestock. During the ensuing chase, a detachment of 5VMR was nearly flanked by the enemy. Sergeant Walter Cass related on his return to Australia that five men from C Company were in a 'hot corner'. Maygar, also in C Company, raced forward and ordered their withdrawal. As they returned, Saddler Arthur Short had his horse shot from under him. Maygar immediately went to his assistance, lifting him up on to his own horse then leaping up behind him and making for the rear. Before they could reach safety, the horse bolted and became mired in boggy ground. Maygar managed to extricate the horse and sent Short on alone on the animal while he proceeded on foot.

On 29 November, Lieutenant Thomas O'Reilly, commander of C Company, was moved to write to his superiors about Maygar’s actions. His report reads:

'Sir, I have the honour to bring to your notice the following act of gallantry performed by Lieutenant L. C. Maygar, belonging to the Company under my command.
On the night of 22nd November 1901, the R.W. [Right Wing], V.M.R. were ordered out for night operations.

On the morning of the 23rd inst., soon after daylight, after B, C and D Coys had captured a large herd of cattle from the enemy at GEELHOUTBOOM and were bringing it back to the Reserve, I was covering the retirement of D Coy which was being closely pressed by a large force of the enemy. I noticed that a detached post of mine, which had orders to destroy one of the enemy's wagons, was being out-flanked, and saw that the only means of saving these men, without great loss to the Company, was to communicate with them immediately.

Lt. Maygar saw the position, and promptly volunteered to bring the men back. He galloped out under a very heavy fire but succeeded in reaching the men. He ordered them to retire, and as they were doing so, the horse of No. 740, Pte. A. J. Short, who was one of the detached post, was shot under him. Lt. Maygar called to Pte. Short to come to him and not to bother about his saddle, as the enemy were then within two hundred yards. He told him to jump up behind, but this he was unable to do, being so exhausted and shaken by the fall from his horse.

Lt. Maygar then dismounted and lifted him on, getting up behind. Pte. Short was so completely exhausted that he was unable to guide the horse, which bolted into boggy ground, causing both riders to dismount. Lt. Maygar, finding on extricating the horse that it could not carry both, put Pte. Short on, and told him to gallop for cover at once, Lt. Maygar proceeding on foot to a ridge on my left, which we were holding. All this was done under a very heavy fire, and I myself was an eye-witness from beginning to end.

The men of my Company have asked that this gallant deed may be brought to your notice, and nothing I can say will, I am sure, appeal more to you than this fact.

I may also add that this is not the first time that Lieut. Maygar has proved himself a gallant Officer under fire.'

For his actions at Geelhoutboom, Maygar was awarded the Victoria Cross (VC). The award was gazetted on 11 February 1902 and Maygar was presented with his VC by the British Commander in Chief, Lord Kitchener, in Pretoria on 8 June. He returned to Australia in early September.

After his return, Maygar resumed his life as a grazier near Euroa. He also continued as a lieutenant in the militia, serving with the 8th Light Horse Regiment, and later as a captain with the 16th Regiment. On 2 November 1912, for his ongoing military service, he was awarded the Colonial Auxiliary Forces Long Service Medal.

With the outbreak of the First World War on 4 August 1914, Maygar immediately offered his services and within three weeks was appointed a captain, commanding B Squadron of the 4th Light Horse Regiment (4LHR). On 19 October, he embarked for Egypt with his unit on HMAT A18 Wiltshire, arriving in Alexandria on 11 December. In January 1915, Maygar was promoted to major.

After training, the regiment moved to Gallipoli as a dismounted unit, landing there on 24 May. It initially occupied positions opposite the German Officer's Trench. For the next few months, 4LHR were deployed at Ryrie's Post, Lone Pine, Courtney's Post and Leane's Trenches. On 17 October Maygar was promoted to temporary lieutenant colonel and given command of 8LHR, barely seven weeks after the regiment had lost nearly three quarters of its men killed or wounded in the disastrous charge at The Nek.

When the regiment was evacuated from the Peninsula on 20 December, Maygar was given command of the last Australian party to leave.

The move to Egypt saw the regiment reunited with their horses before moving east for operations in Sinai/Palestine as part of the ANZAC Mounted Division. In August 1916, 8LHR was involved in heavy action pushing the advance following the battle of Romani and later contributed to operations in Sagia and Hod el Bada. During the August fighting, Maygar's horse, Ned, a large grey charger that had accompanied him from Australia, was killed. On 13 October, Maygar was awarded the first of three Mentioned in Despatches that he received during the course of the war.

In December, the ANZAC Mounted Division was ordered to capture the village of Magdhaba. Situated in the northern Sinai desert, the village protected the route to Palestine and had been bolstered by thousands of Turkish troops who had built strong redoubts around the village. The assault on 23 December, with 8LHR attacking from a ridge north of the village, almost met with failure when strong resistance delayed the capture of vital water supplies. The horses of the attacking forces had been without water for many hours travelling across harsh dry terrain. Just as Major General Harry Chauvel proposed a withdrawal, 1 Light Horse Brigade (LHB) broke through, signalling a change of fortune and within hours the objective was taken. During the assault, 8LHR lost five officers and ten other ranks either killed or wounded.

In January 1917, 8LHR, though only playing a reserve role in the assault on Rafa, provided outposts against a column of enemy reinforcements of some 2000 infantry troops and a cavalry squadron. On the 19th, while Brigadier General Royston was on leave, Maygar assumed temporary command of 3LHB, a position he held periodically in 1917 during Royston's absences. Following the assault on Rafa, the brigade was transferred to the newly formed Imperial Mounted Division, which was renamed the Australian Mounted Division in July 1917.

During March and April, 8LHR was involved in the unsuccessful offensives against the coastal Palestinian town of Gaza. During heavy fighting in the second attempt on 19 April, the regiment found itself exposed in a gap created when two flanking brigades were forced to diverge. By 4pm it was obvious the attack had failed and the decision was made to withdraw, by which time the regiment had suffered 73 casualties. In the action Maygar lost another favourite mount, 'Dick', when it was shot from under him.

For his leadership during the attacks at Maghdaba and Rafa, Maygar was awarded the Distinguished Service Order on 3 June. Four days later, in recognition of his long and distinguished military career, he was awarded the Colonial Auxiliary Forces Officer's Decoration.

In October, 3LHB was ordered to move up to assist in the attack on Beersheba, a strategic position required for a third planned assault on Gaza. On 31 October, 8LHR, temporarily detached to the Anzac Mounted Division, played a support role in the offensive that ended in victory precipitated by the renowned mounted charge of the 4th Light Horse Brigade. At around 2.30 in the afternoon, Maygar and 8LHR were ordered to Chauvel's headquarters. The regiment arrived at dusk and Maygar reported in while his troops remained nearby.

Later, as Maygar was rejoining the regiment, a German plane arrived and attacked the unit with bombs and machine gun fire. Maygar was wounded and his horse was startled, and bolted into the night. Troops quickly dashed off after him only to find the horse riderless and covered in blood. Later that night Maygar was found. His left arm was shattered and he was suffering from the effects of blood loss. Transferred to the 65th Casualty Clearing Station at Karm, his arm was amputated and he was listed as dangerously ill. According to Major Archibald McLaurin, who took over command of the regiment, Maygar initially rallied after surgery, and was in high spirits, when he suffered a haemorrhage and died soon afterwards.

Maygar is buried in the Beersheba War Cemetery, in grave number Q 82. His VC came into the Memorial's National Collection in 1977.