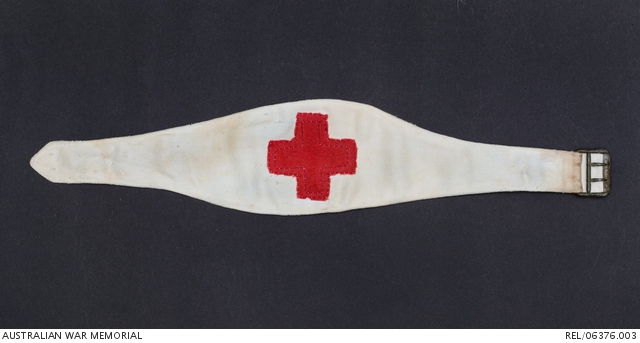 This brassard was worn by Vivian Bullwinkel on her uniform sleeve when she survived being shot by Japanese soldiers at Banka Island after the sinking of the Vyner Brooke in 1942.

Bullwinkel was born South Australia in 1918, and trained as a nurse at Broken Hill. She enlisted as a staff nurse in the Australian Army Nursing Service (AANS) on 8 August 1941 and was posted to Malaya with 13 Australian General Hospital. As the Japanese advanced down the Malay Peninsula to Singapore a decision was made to evacuate the AANS to Australia and they left in two groups. The first group of 59 nurses left on 11 February 1942 and reached Australia safely. The second group of 65 nurses sailed on 12 February aboard the Vyner Brooke together with 300 civilian passengers.

The ship was bombed by the Japanese and had to be abandoned in Banka Strait, where it sank. A number of passengers, including some nurses, were drowned, but others made it to shore. A group of 22 of the AANS, as well as other survivors, landed on Radji Beach on Banka Island and awaited the arrival of the Japanese the following morning. The Japanese separated the survivors into three groups. The men were taken away and shot, the officers bayonetted, and the women, together with men too sick to move, were ordered into the sea. When they were knee deep in water the Japanese machine gunned them. Sister Bullwinkel was the sole survivor. Wounded by a single shot through the back, which did not hit any vital organ, she recovered consciousness to find herself washed ashore on her back.

The Japanese were still on the beach and after a further period of unconsciousness she found herself alone surrounded by the dead. She moved into the jungle on the edge of the beach where she met a badly wounded Englishman, the sole survivor of the bayoneting. They stayed in the jungle for ten days supplied with food by women from a local village, before surrendering to a Japanese naval patrol. Bullwinkel disguised her injuries by adjusting the belt of her dress to cover the entry and exit holes from the bullet. She joined the other surviving nurses in captivity as a prisoner of war.