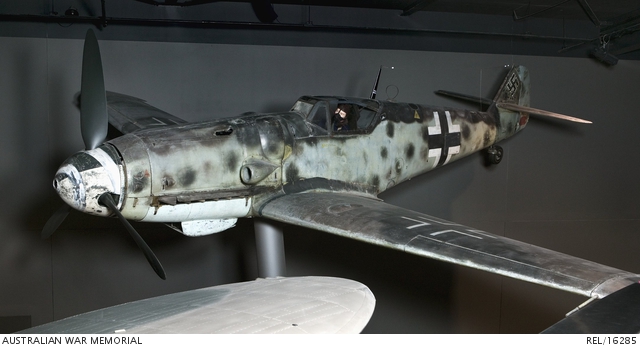 The service history of this aircraft is unknown however it shows evidence of having been damaged in action and an inscription painted on the fuselage indicates a refurbishment in December 1944. In 1946 it was located at No 4 Maintenance Unit in the United Kingdom where it was selected for shipment to Australia for the Australian War Memorial's collection. It was stored at RAAF Laverton Victoria (Vic) and transferred to the Memorial in 1955. In 1961 it was sold to a private vendor who subsequently sold it to Marshall Airways at Bankstown where it was displayed. Later the aircraft was to be exported to the United Kingdom, but it was confiscated by Australian Customs in 1979 before leaving the country. It was then stored at RAAF 2 Stores Depot, Regents Park, New South Wales (NSW) before it was reacquired by the Memorial in 1988.

Type history: First flown in 1935, the Bf 109 was Germany's most numerous fighter aircraft. A total of 33,000 were constructed, more than any other fighter in any country. Type info: Crew: one; Powerplant: Daimler-Benz DB 605-A1, Serial No. 78246A1 (installed) A 12 cylinder inverted 60 degree Vee, super-charged, petrol injection, liquid cooled type; Armament: Two MG 131 machine-guns, a single 30mm Mk 108 canon firing through the spinner (not fitted when received).