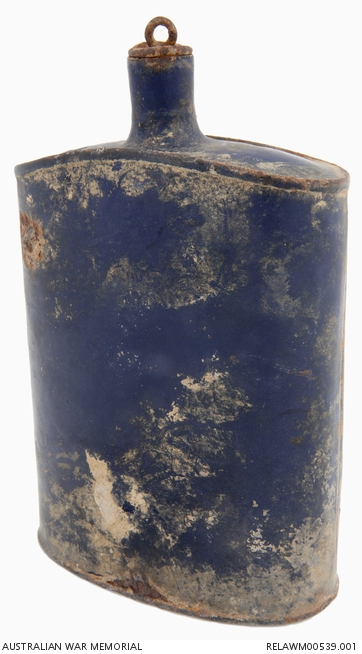 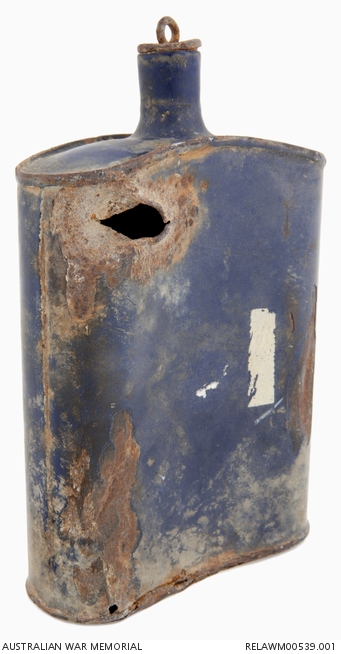 Australian army issue 1903 Pattern water bottle. The kidney shaped bottle of blue enamelled iron with a cylindrical neck and tapered cork stopper with a drilled eye bolt which would have had a piece of string to secure it the stopper. The seam on the base is rusted and the bottle retains mud from the battlefield. The back of the proper left shoulder of the bottle has a shrapnel entry hole; a lead shrapnel ball is loose within the bottle. The bottle is missing its khaki cloth cover and webbing carrier.

This Australian Army 1903 Pattern water bottle was recovered from the Fromelles battlefield on the day of the Armistice, 11 November 1918. The bottle was found, with numerous other water-bottles, in a shallow ditch within the area that the Australians fought over during the Battle of Fromelles, on 19 and 20 July 1916.

Fromelles was the first major battle fought by Australian troops on the Western Front. Directed against a strong German position known as the Sugar Loaf salient, the attack was intended primarily as a feint to draw German troops away from the Somme offensive then being pursued further to the south. A seven-hour preparatory bombardment deprived the attack of any hope of surprise, and ultimately proved ineffective in subduing the well-entrenched defenders. When the troops of the 5th Australian and 61st British Divisions attacked at 6 pm on 19 July 1916, they suffered heavily at the hands of German machine-gunners. Small parts of the German trenches were captured by the 8th and 14th Australian Brigades, but, devoid of flanking support and subjected to fierce counter-attacks, they were forced to withdraw. By 8am on 20 July 1916, the battle was over. The 5th Australian Division suffered 5,533 casualties, rendering it incapable of offensive action for many months; the 61st British Division suffered 1,547. The German casualties were little more than 1,000. The attack was a complete failure as the Germans realised within a few hours it was merely a feint. It had no impact whatsoever upon the progress of the Somme offensive.